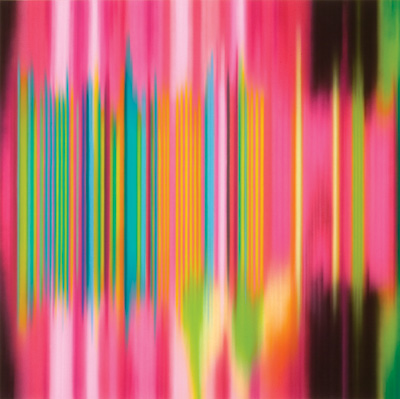 While not the typical cultural hub, Las Vegas has been essential to English-born artist Tim Bavington's success. Bavington left LA in the 1990s for Vegas, and later opted for grad school at UNLV after meeting Dave Hickey through Jeremy Gilbert-Rolfe, his professor at Art Center in Pasadena. With a shared affinity for Ed Ruscha, "by a great stroke of luck," Hickey became Bavington's mentor. "There couldn't have been a more perfect coach for me," Bavington reasons. "We both have the same taste and Hickey is a rock 'n' roll guy... a maverick to the larger establishment where you can chose to not be in the center and do your own thing."

Bavington credits Hickey for attracting top visitors to UNLV, including Jim Isermann, Robert Storr, Arthur Danto and Jerry Saltz. Regarding his teaching, Bavington recalls, Hickey "referred to his coaching method as one of 'benign neglect'--you got left alone, it was freedom." Hickey's presence, the open desert, and the low expenses in Las Vegas all proved ideal for Bavington, who never expected a career as a fine artist. Beating the odds, his work can now be found in various major museum collections, including MOMA in New York, while he continues to expand his audience through public art commissions in Portland and San Diego.

Bavington's current exhibition at Scott White Contemporary Art in San Diego, titled "Changes" (through May 7), highlights his signature style cultivated over the past decade, rendering large-scale abstract stripe paintings loaded with intense color inspired by rock songs. In 2002, to break ingrained habits, Bavington designed a system corresponding color with musical tones and a stripe's width with the length of a note. Explaining "the original idea to use a piece of music would mean that I would be given color combinations that I wouldn't think to put next to one another." Songs provide the basic structure, but the work is more than a visual translation of the music. Bavington maintains flexibility, experimentation and intuition in the creative process. "Changes" represents decidedly looser work from 2010-2011. In particular, the controlled stripes in his standout 6' x 12' painting Thunderbird (2011), dissolve and blur at the base into a hazy color field reminiscent of Rothko. The work is disorienting. It engulfs and viscerally engages, conjuring the transcendental aspirations of the old-guard abstract expressionists. Yet the contemporary palette of contrasting colors competing for attention presents a sensory overload experience suited to our current digitally saturated culture, while the title, based on the 1970s Quiet Riot rock-ballad, takes us back to time when musicians had more substance compared to today's crop of manufactured stars. Bavington muses, "I relate very much to music. I don't know about the current 'American Idol' generation. It seems more important to an older generation and particularly [to] my parents it seemed more revolutionary. I don't know what it is about being fascinated with the time in which you were born," he adds, explaining his interest in making '60s- and '70s-inspired paintings with a contemporary twist.

Bavington's psychedelic painting Manic (2011), based on Hendrix's "Manic Depression," is mesmerizing. Bavington dropped 'depression' from the title maintaining "it might have been what drove me to use it in the beginning" but explains manic-depression is too cliche to explore as an artist. Avoiding the stereotype of the angst ridden high-minded artist, Bavington stresses "the pretense of abstraction and high spirituality have demythologized... I could have the influence of high culture, but I don't take it so seriously I can't inject it with street culture."

Wrestling with the ideas explored by his teachers Gilbert-Rolfe and Hickey (who in the 1990s put beauty on the map as a viable concept worth re-exploring), Bavington collapses old notions of visual pleasure as frivolous, and fuses the esoteric sublime with Pop culture. This co-mingling makes Bavington's work difficult to place, yet highly appealing.

"Tim Bavington: Changes" can be seen at Scott White Contemporary Art, in San Diego, CA, from March 11 - May 7, 2011. www.scottwhiteart.com