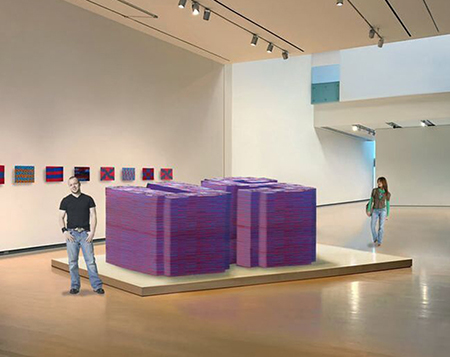 Amid the noisy backdrop of American political life, a textile artist working in the Southwest desert has been quietly gathering works by artists and community members eager to counter partisan politics with civil conversations. Ann Morton, a Phoenix-based artist whose work often explores social, cultural, and political themes, is centering the voices of artists and other community members through a participatory art engagement called “Violet Protest.” Its title, created before the violence against Black bodies that moved millions to march in the streets in recent months, is a play on words. By removing a single letter from the word “violent,” the artist signals her intention to create a space for non-violent protest.

Using networks of artists and social media spaces, Morton put out the call for 8-inch-by-8-inch fabric squares created with relatively equal parts of red and blue, her color choices reflecting the ways the two colors have become associated with our two major political parties. She asked makers to submit designs reflecting core values she identifies with democratic life: respect for the other, citizenship, compassion, country over party and corporate influence, courage, candor, compassion, creativity. To date, nearly 12,000 squares have pledged by some 1,600 makers. More than 4,000 of the small fiber works have already arrived at her artist studio, where she’s working to incorporate them into an exhibition scheduled to open next March at the Phoenix Art Museum. She’d envisioned stacking the pieces to create a soft sculpture comprising two letters: U and S. Placed side by side, Morton expects to reveal a rich landscape of purple that harkens to the commonalities at play even amid politics that punctuate division. She’s also planning to show individual squares, paying homage to the work undertaken by individual makers even as she elevates the significance of group action.

Launching “Violet Protest” followed years of Morton making political art with a radically different tone. She’s best-known to many for an ongoing series called “Proof-Reading,” which includes cotton handkerchiefs made with white cotton sheeting embroidered with red and blue thread. Typically, these text-based works feature words uttered or tweeted by Donald Trump, but edited to significantly change their meaning. For a group exhibition titled “Blue,” currently on view by appointment at Lisa Sette Gallery, she transforms Trump’s utterance about COVID-19 “disappearing one day like a miracle” to suggest that the miracle would actually be Trump disappearing. By contrast, “Violet Protest” is firmly grounded in members of the community, reflecting the ways community members can create and shift narratives to decenter voices of division and hate.

Morton hadn’t expected that this new collective action would happen during a significant period of societal upheaval. But here we are, with a raging pandemic for which masks have become a signifier of choosing a political side rather than a precautionary health measure; and the heightened rage and grief wrought by acts of individual and systemic injustice against people of color. But the impact of recent events, from Black Lives Matter protests to the deaths of John Lewis and Ruth Bader Ginsburg, are reflected in several of the textile works submitted for “Violet Protest,” a fact that deepens their meaning for the artist who set about fostering a creative space where commonality would diminish division. She’s extended the project’s timeline, giving participants greater opportunity to reflect a wider arc of history, especially in the context of conflicting post-election impulses between division and unity.

There’s a final element of this collective act, which will transpire after the exhibition. Morton plans to send several of these small, modest works to every member of the 117th Congress in late 2021, as a way to convey the values at its core and drive greater expressions of bipartisanship. It remains to be seen whether “Violet Protest” can impact the political landscape at this scale, but the robust response by those who’ve lent their time and positive intentions offers hope that despite the dangerous din of hyper-partisans, unifiers are quietly working among us — and they have power.