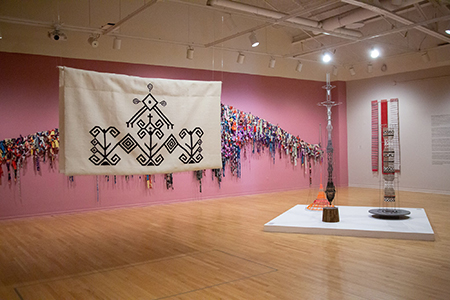 “Atavia,” the title of a series of large scale, woven sculptures by Georgina Valverde, is the Latin word for ‘great-great-great grandmother.’ Valverde, along with the other four contemporary artists in “Woven: Connections and Meanings,” reinforce a lineage of craftsmanship that is historically feminine, passed down through generations of Mexican and indigenous heritage. Tanya Aguiñiga, Florencia Guillén, Consuelo Jimenez Underwood, Marta Palau and Georgina Valverde each contribute works with textiles and weaving at their cores, infusing tradition with contemporary urgency.

Among the works in “Woven,” Palau and Jimenez Underwood are represented by more typical kinds of tapestries. An early advocate for elevating “craft” into “fine art” and addressing female and immigrant issues within her work, Palau (b.1934) embraces natural materials local to the Mexican landscape. Her “Dharma” (1972), though it hangs from a wooden dowel, appears distinctly figurative. Woven of wool and jute in neutral tones punctuated with black and red, “Dharma” bears an earthy, shamanistic aura, linking nature and handicraft with the transcendent.

Where Palau’s symbolism is of the metaphysical kind, Jimenez Underwood’s is more vernacular, with silk and fabric woven through with everyday objects. In works like “Home of the Brave,” what appears at first to be a black, blue and red striped flag of soft, nubby textile is actually run through with hundreds of safety pins and bits of barbed wire nestled within the fabric. Jimenez Underwood has stated that her work embodies “the quiet rage that has permeated the Americas,” and in “Home of the Brave,” the artist has made palpable the danger that can be embedded within shows of nationalism — especially as it pertains to the US/Mexico border today.

The border also factors into Aguiñiga’s installations: the enormous “CRAFTA,” a wall hanging woven from 75 shredded blankets bought at a border crossing, and “2 Donkeys & 3 Chihuahuas,” a set of plaster objects adorned with yarn. While Palau embraces natural materials native to Mexico, Aguiñiga recasts manufactured tchotchkes and cheap textiles as “raw goods.” Her cast plaster animals may be replicas of one another, but with their braided harnesses, yarn-wrapped ears and embroidered limbs, each is unique. Aguiñiga’s works reinforce the persistence of the handmade. They convey that mass production does not signal the end of such a skill, and indeed craft traditions are constantly revitalized.

Guillén, too, mines the shifting meaning of craft in her installation, “Resistance.” Suspended from the ceiling like a banner, one side features a bold, graphic pattern, while on the other, a projected video of the tapestry’s weaving process is overlaid with audio articulating the ways in which women have participated in resistance. We are told of women supporting the soldiers in the Mexican Revolution as traveling homemakers, often subjected to violence and taken as prisoners; accounts of women in war efforts manufacturing uniforms; and the notion that women’s bodies quite literally manufacture a nation’s soldiers. “Resistance” shifts the tenor of the entire room as we realize the potential weaponization of the domestic and the feminine — the kinds of words that once seemed simply nurturing and harmless.

A trio of Valverde’s human-scaled, mixed-media sculptures holds court in the center of the gallery, each titled with the names of women from the artist’s own family: “Beacon (for Bertha Parkhurst),” “Vessel (for Mathilde Gartner),” “Pillar (for Norma Clark).” Nearby are three back-strap looms, cotton textiles from the museum’s permanent collection, and in the presence of Valverde’s homages, the pieces’ anonymity is made that much more poignant. In the context of this exhibition, and among such formidable artists and craftswomen, the cotton sashes not only embody the technique and aesthetics that inspire the practices of each artist, but are symbolic of the prowess and innovation that has been honed over time within the domestic.