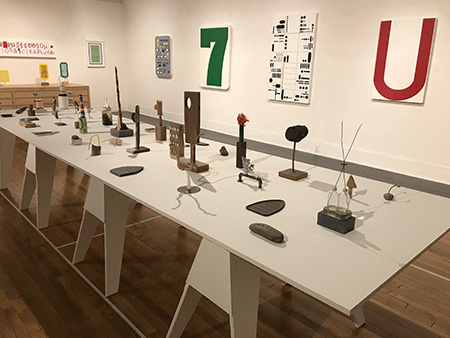 Fist-size sculptures created with found objects, by artist Matt Magee, sit atop a white oblong panel supported by four sawhorses. It’s the dominant piece in this exhibition, which also features works by Albert Chamillard and artists from Papua New Guinea. Imagining the infinite ways visitors might describe Magee’s sculptures ("prima materia," 1981-2018), created with objects such as seashells and rusted tin cans, one appreciates the artist’s facility for exploring essential questions, such as the degree to which reality creates language and language creates reality.

Entering the gallery, one first encounters ink on paper drawings by Chamillard, a Tucson-based artist whose cross-hatching using an ultra-fine Pilot G2 pen punctuates the significance of the earliest forms of written language. "Implied Violence" takes the form of a paper airplane, a metaphor for language’s role in giving flight to human ideas and emotions. Chamillard also relies heavily on geometric forms that modernize his calligraphy to correlate with the language, logic and mathematics of the 20th century.

Magee’s works, including several oil paintings on panels, are infused with symbols and icons that also reflect both ancient forms of language and modern technologies that tether man to machine. The Phoenix-based artist has spent decades developing this visual syntax, a constant work in progress informed by everyday observations, autobiography, numerology and art historical insights. “Red Poem for Dublin” was inspired, in part, by a fortune cookie containing the usual white strip of paper on which are printed several garbled, overlapping messages. “Map 1632 2” references an urban traffic grid, with a nod to the artist’s reverence for Agnes Martin.

Flat, wooden carvings conceived as storyboards tell the story of daily life in a Papua New Guinea village round out the exhibition. Seen alongside Chamillard and Magee, they prompt us to consider the infinite variations of language and storytelling. Together, the works seen here take us on a circuitous journey through history, with an eye towards a future that’s being written in entirely new ways.