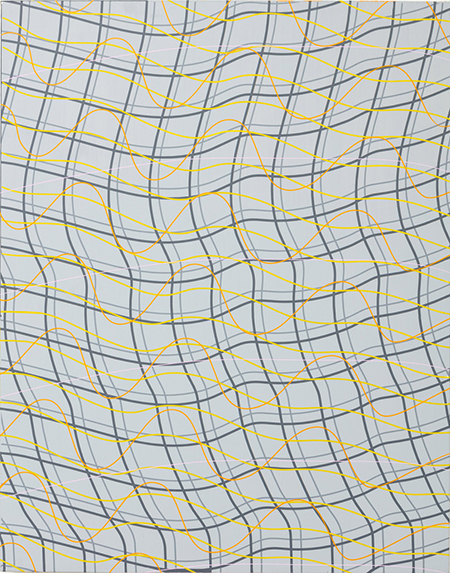 Timothy Harding’s new paintings are paired with a site-specific installation. Holding strong to a minimalist abstract aesthetic, Harding heads in a bold new direction from previous work by imbuing his layered grid paintings with waveforms, arcs and curved lines that reach beyond the formal rectilinearity he explored previously. His use of vibrant colors and energetic lines, inspired in part by the pathways taken by atomic particles, result in surfaces steeped in pulsating visual phrases and shimmering contrasts, a product of the tension that the various compositional elements make possible by virtue of their interaction.

In “Flipped Grid” a white surface base acts as the ground for on which visual contrasts play out. A lattice network of black lines engages the eye, playing the foil to an alternate network of grey intersecting lines that mirror the black counter-grid. This visual opposition sets up a surface that deals with illusion, depth and a playful sense of motion that runs throughout the show. A larger, more colorful painting channels the yellow register, “New_drawing_5(Yellows).” Harding utilizes sine wave bands of different shades of yellow that are propelled horizontally across the canvas. Thinner light blue lines counter the yellow in the vertical dimension, while dark blue lines move along horizontally, but with a shorter frequency.  The interplay among these elements, and the clear traces of Harding’s hand, suggest his interest in precision and industry may only be the starting point for his real focus: the human touch.