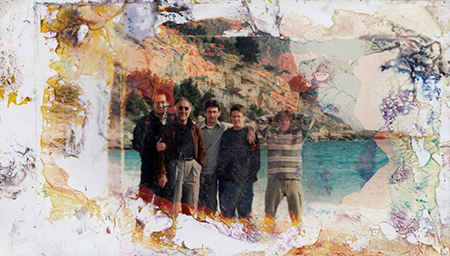 A vitrine situated in the center of the gallery contains a stack of photographs belonging to Avisheh Mohsenin that survived Hurricane Harvey. They are stuck together, damaged by the flood waters that filled her studio. The day before the hurricane’s impact, Mohsenin and her husband attempted to move everything to high shelves, preparing for about four feet of water. They had no idea the water would reach the ceiling. The loss was nearly total.

Mohsenin was raised in Iran, emigrated to Chicago in 1997, and moved to Houston in 2016. She and her husband bought a house near a ravine that had a studio on the lower level. In the studio, along with her art work, she lost family photos, handwritten letters, childhood slides and memorabilia from her father’s travels. “Harvey ruined years of my art. The ruins are beautiful” is the title of an essay Mohsenin wrote for the Houston Chronicle that was published on Sept. 22, 2017. She wrote about her initial reactions — loss, guilt, remorse, anger and sadness. But as she began working through the debris to see what she could salvage, Mohsenin discovered that the water mixing with the photographic chemicals had created new abstract images. She became enveloped in the “vortex of peace and serenity that one experiences when deeply immersed in the creative process.” Ultimately, creating new works of art from the ruins helped her to heal from the trauma of the hurricane.

Titled “Resurface,” the show commemorates the one-year anniversary of Harvey. Photographs of the vintage prints, as well as nearly a dozen photo collages created with them, comprise the exhibition. Some are heartbreaking. “Resurface—Excavation 16” pictures five men one assumes to be family members posing on a beach. But the central image is nearly engulfed by swirls of color. “Resurface—Excavation 30” is an out-of-focus image of two people kissing. Others are almost totally abstract, with only small areas revealing the original subject of the photograph. “Resurface—Excavation 24” began as a copy of Picasso’s “Demoiselles d’Avignon,” but all that remains of the image is a single face amid a sea of colorful patterns. Other photos depict glimpses of a ballerina, a child’s portrait and train tracks with a negative fragment attached to the surface.

The style of these new photographs relates to Mohsenin’s previous work, which typically has drawn on war, immigration, dislocation, memory and loss as subjects. Her compositions evolved from photographic images to sculptural pieces made with found objects and magazine cutouts embellished with acrylic and pencil. The layering in past pieces informs the Harvey photographs, which convey a sense of hope and gratitude. From the destruction, Mohsenin has created work that is both compelling and optimistic.