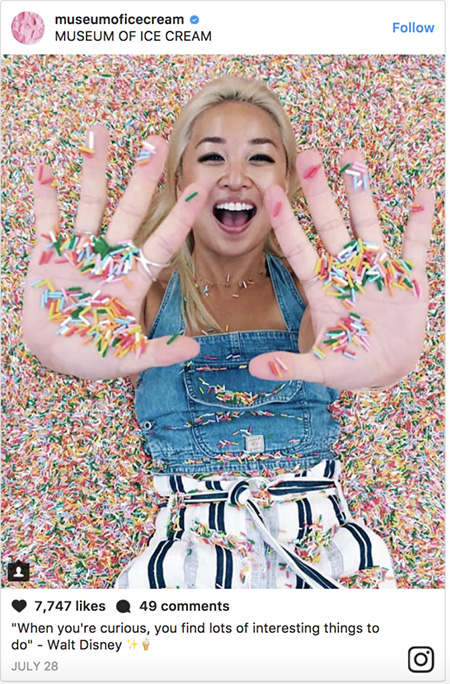 Do museums matter? Says the founder of the Museum of Ice Cream: “not anymore."

Last month the art world wrenched its way through one of its periodic soul-searching spasms after the publication of a new study, entitled “Culture Track 17,” [http://2017study.culturetrack.com/] conducted by the research and marketing firm LaPlaca Cohen. Since the study came out, some online media outlets [https://news.artnet.com/art-world/culture-track-2017-report-summary-1120559] have linked its findings [https://isys6621.com/2017/10/24/how-selfies-led-to-a-museum-about-ice-cream/] to the sweet-toothed, culture-lite phenomenon known as the Museum of Ice Cream [https://www.museumoficecream.com/]. The million-dollar conundrum that museums, nonprofits, and art fairs are counting on LaPlaca to suss out, is the matter of what today’s art-seekers are actually seeking.  Apparently, at least in part, it’s ice cream.

The Museum of Ice Cream has enjoyed wildly successful runs in New York, Los Angeles, and San Francisco, and beginning in mid-December will set up shop in Miami’s perennially chic South Beach. How to describe such an enterprise? Basically it’s a series of pastel-hued rooms themed around ice-cream parlors, soda fountains, sweets, and other confectionaries. You can make cotton candy there. Immerse yourself in a pool-sized bath of cake sprinkles, commemorating the moment on social media. Pose among oversized cherries, Gummy Bears, lollipops, and a gold-horned unicorn. You know, adult stuff. The posing and the posting are the whole point of this nirvana for selfie addicts.

Moreover, you can snap away while pretending to engage with cultural significance, for, as the study details, culture ain’t what it used to be. Large percentages of respondents consider street fairs, food carts, wine tastings, and destination dining on par with museums, galleries, the symphony, ballet, and opera. “The new cultural consumer,” according to the study’s authors, finds culture “in anything from Caravaggio to Coachella, Tannhäuser to taco trucks.” They prefer activities in which they “have fun” (81%), “feel less stressed” (76%), and improve their “health and well-being” (55%). Kind of like a playground, day spa, or health club, but with slightly more upscale window dressing. Generally, these cultural aspirants don’t care for art that dictates their experience; they want to sculpt it to their own aims, which are fickle. “Audiences have never been more empowered to choose and customize the types of experiences they want, and can change their minds at any given moment.”

They also prefer their cultural, quasi-cultural, or pseudo-cultural night out on the town to be “social,” “interactive,” “immersive,” “lively,” and “active.” Charged with meeting their needs, museum directors and curators become event planners, laying out an aesthetic smorgasbord that Culture Track calls “the omnivorous experience.” These hungry omnivores aren’t so much looking to savor artistic delicacies as they’re out to shovel down as many hors d’oeuvres as possible before scurrying on to the next movable feast. Finally, the loyalty of the new culture seeker to nonprofits is way down since 2011, the result of “cultural promiscuity.” Why buy season tickets, become a member, and forge an evolving relationship when you can play the field with so many other contenders? What works on Tinder and Grindr works with MoMA and LACMA, right?

As easy as it would be to parody these trends, drawing hard lines between high and pop cultures, education and entertainment, isn’t the answer. We’ve always had natural-history museums with dinosaur bones to ogle, science museums with static-electricity orbs that make your hair stand on end — we love our Legoland, our Rock & Roll Hall of Fame, our Museum of Sex. In Yokohama and Osaka, Japan, there are even museums dedicated to ramen noodles. So we’re in no danger of running out of theme parks, video arcades, carnivals, roller rinks, and Chuck E. Cheeses where we can get our whimsy on and reconnect with our child selves. But what outlets does that leave our adult passions, our yearning to touch the sublime? How would we know whether “Tannhäuser" is qualitatively different — maybe even better than — a taco truck when arts education is ruthlessly defunded and cultural stewardship no longer instilled?

Our faculties of attentiveness, appreciation, and connoisseurship atrophy in a Dubordian “society of spectacle” full of blinking, honking, shiny, silly things that never stand still or demand sustained contemplation. Wallowing in a tub of cake sprinkles is far easier. Selfie-snapping with a unicorn is more native. Artists become marginalized, and the discourse cheapened, when art consumers single-mindedly fixate on experiences that turn them into the stars.

Ours is an era of trickle-down narcissism, with the tone set at the top and a fathomless sinkhole underneath. Ice cream is the perfect focus for our brave new eyes and omnivorous stomachs: It’s full of empty calories that give you an instant sugar fix. And too much of it turns muscle to blubber. Our president loves it so much, he has his servers give him two scoops for everybody else’s one. This is where our vacuity has led us. To paraphrase journalist Lincoln Steffens, “I have seen the future, and it is very creamy and sweet.” The art world and the culture it presumes to critique will not resume the quest for meaning unless we disavow the ethos of solipsism. Until then, it’s sugar in, sugar out. Bring on the butter pecan and the mocha almond fudge; there’s a rocky road ahead.