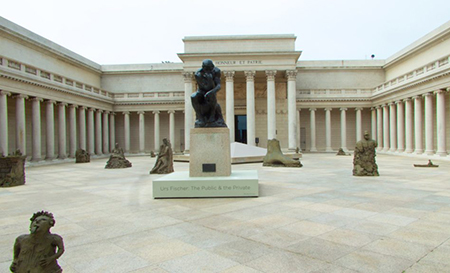 Urs Fischer, "The Public & The Private," 2017, installation view in the courtyard of the Legion of Honor, bronze sculptures surrounding Auguste Rodin's "Thinker."

Nowadays, we increasingly read that postmodernism is no more. Tufts University philosopher Daniel Dennett, a critic of postmodernism, makes an argument that may sound familiar: "Postmodernism, the school of 'thought' that proclaimed 'There are no truths, only interpretations' has largely played itself out in absurdity, but it has left behind a generation of academics in the humanities disabled by their distrust of the very idea of truth and their disrespect for evidence, settling for 'conversations' in which nobody is wrong and nothing can be confirmed, only asserted with whatever style you can muster."

In the post-postmodernist age, we are invited to forsake the intellectual skepticism we imbibed in school (some of us) , the old-time irreligion, and to find new faith in ... something. Culture critic Eric Lawrence Gans posits a "post-millennialist" rejection of politically correct "victimary thinking" in favor of "non-victimary dialogue" that will “diminish ... the amount of resentment in the world.” Alan Kirby, a British critic and author of “The Death of Postmodernism and Beyond” (2006), is less sanguine, assessing our current condition as “digimodernism" or "pseudo-modernism;" he enumerates our faults: "In pseudo-modernism one phones, clicks, presses, surfs, chooses, moves, downloads," excoriating even — is nothing sacred? — "the drivel found ... on some Wikipedia pages.”

This confusion about the intersection of philosophy and aesthetics came to mind as I absorbed Urs Fischer's show, “The Pubic and the Private” (through July 2) at the Legion of Honor. Fischer is a skilled artist in the conceptual mode, i.e., intellectual and provocative, but not emotionally engaging. The museum is displaying two bodies of his work: sixteen large bronze sculptures made from amateur artist clay models that are dispersed in the entrance courtyard, surrounding Rodin’s “Thinker.” And mixed-media paintings and sculptures that are installed at various points within the Legion’s traditional galleries, surrounded by Renaissance, Baroque, Rococo and Neoclassical masterworks. The juxtaposition of old and new is so striking that I felt compelled to go back twice. The mashup effect reflects our current confusion about art’s meaning and how it is affected by context. The exhibition, which celebrates the centenary of Rodin’s death, is a mixed bag.

The Legion of Honor, you may recall, is a slightly reduced-scale replica, erected in 1924 on a hill overlooking scenic San Francisco Bay, of Pierre Rousseau’s 1782 neoclassical Palais de la Légion d'Honneur in Paris. If the original Legion celebrates military valor and other meritorious service on behalf of the French nation, the San Francisco museum seems the very model of a traditional museum. Its Greco-Roman architectural style (so often copied for banks and treasuries) connotes stability, substance and endurance. A 1923 plaque mounted on the archway leading into the colonnaded courtyard commemorates “comradeship with the dead” of America’s Great War, and Rodin’s “Thinker" seemingly broods over Patrie et Honneur (Country and Honor), which is engraved on the entrance pediment.

The juxtaposition between the lumpy antiheroic works and the classical columns enclosing the space like disciplined soldiers is odd in a good way. Only steps away from George Segal’s Holocaust memorial, and encircling Rodin’s masterpiece, these bronze turds are inept, funny and endearing. Louis XIV in a sagging ornate throne; the head of Napoleon, sporting the familiar tricornered hat and perched atop a column of slumping mud; a boy in a chair as an enervated, splayed protagonist; a man on a pile of dirt is a comic version of the Greek hero Prometheus, awaiting his daily evisceration by eagle; a Pietà boasting a monstrous Madonna instead of the eternally young Queen of Heaven.

Less fortuitous are the works installed within the museum galleries. Here, the juxtapositions become jarring to anyone with affection for Old Master art or historic artifacts. Fischer’s oddball sculptures, mixtures of hardware-store fixtures and digital technology, are eccentric, but lack the dopey, excremental appeal of the works outside. "Invisible Mother," a partial skeleton lying in a chair and irrigated by water run though a hose, complete with gold coins in the fountain, feels like a prop from the "Pirates of the Caribbean" ride. “Fiction" is a table with a few objects, vibrating to symbolize “a mental state of blurriness." But there’s nothing tentative about the dramatic Dutch portraits and landscapes behind it.

“Dazzled," a pair of large, disembodied eyes, is described as critiquing the artificiality of socially constructed ideals and objects. But they look away from a trio of English portraits and toward a pair of Scottish ones, unseeing and unblinking. “Kratz" is composed of a single bed filled with a disastrous amount gravel or cement that brings it close to collapse. Like competing optical illusions, cannot be seen simultaneously; they suffer from poor chemistry

I recently ran across the Japanese word tokonoma, an alcove dedicated to a single work of art. Artworks should be displayed either in isolation, to encourage contemplation, or in visual