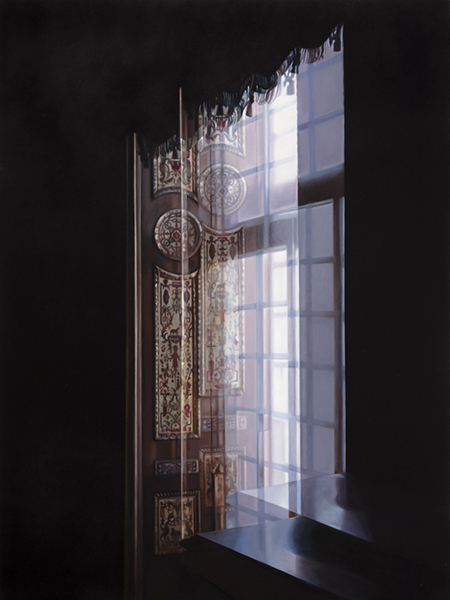 Patti Oleon’s newest series of paintings are grouped under the title “Neither Here Nor There.” They represent the fruits of a 2013 Guggenheim fellowship that allowed Oleon to travel Europe for source material. In her visits to Budapest, Prague, Venice, Berlin and Istanbul, she photographed the interiors of restaurants, hotel lobbies, museums, palaces and theaters, chosen for their historical significance. These public spaces were often teeming with people, something you would never know looking at the final product, wherein Oleon edits the images, concentrating on the physical surroundings.  Her interest lies in the manipulation of pictorial space through the reorganization, layering and mirroring of interior and architectural design elements. Her particular talent lies in creating mysterious virtual worlds filled with compelling reflections of light, sometimes in deep focus.

In “Window Dressing” complete darkness surrounds a double windowpane that provides the only source of light at the center of the canvas. The light exposes carved wood paneling and a table, each doubled like the window, producing the effect of a mysterious photographic multiple exposure. In “Venice Restaurant” the topmost portion of the canvas reveals a ceiling, seemingly normal enough, but then Oleon places three connected walls with rows of mirrors underneath it, cleverly repeating the sequence directly below the first set as if it could go on into infinity. It makes this painting compelling to the eye, like watching the twisting and curling sets in the movie “Inception,” as they fold over each other in all of those interlacing dreams. Only we can study these and her other images to our hearts’ content. These paintings are windows that link us to intimate dreamscapes.