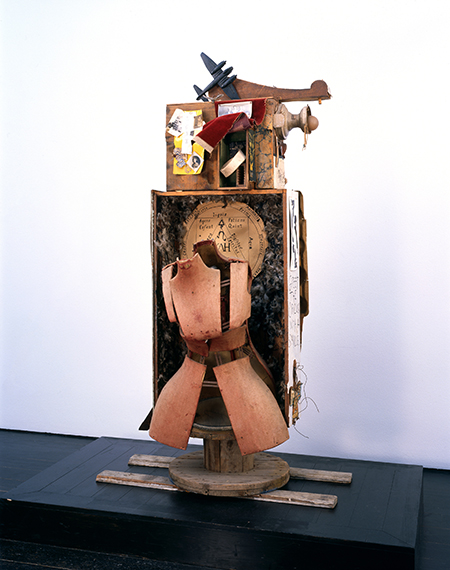 “Holy Barbarians: Beat Culture on the West Coast” is a cleverly curated show, given the web of connections among the six artists included and with Menil Collection Founding Director Walter Hopps (1932-2005). It started with Ferus Gallery, a hotspot of Los Angeles avant-garde artists that opened in 1957. Hopps, Edward Kienholz and poet Bob Alexander were partners in the gallery, which showed the work of Kienholz, John Altoon, Jay DeFeo and Wallace Berman, all of whom are in this show. Los Angeles artists who had their first solo show at the gallery include Billy Al Bengston, Ed Moses, Robert Irwin, Kenneth Price, Larry Bell and Ed Ruscha. After Hopps left in 1962 to become director of the Pasadena Museum of Art, Irving Blum became a partner in the gallery and organized shows by Jasper Johns, Roy Lichtenstein, and Frank Stella. Ferus also had the first exhibition of Andy Warhol’s “Campbells Soup Cans," as well as shows by Richard Diebenkorn, Clifford Still and Sonia Gechtoff.

The show’s title is taken from a book by poet Lawrence Lipton published in 1959 about the “Beats” living in Venice Beach. Under the picture of a bare-chested Altoon, the cover lines read: “At last the complete story of the ‘Beats’ — that hip, cool, frantic generation of new Bohemians who are turning the American scale of values inside out.” The Beat culture was partly a literary movement led by writers in the 1950s such as Allen Ginsberg, William S. Burroughs and Jack Kerouac who rejected middle-class values in favor of a more free-wheeling lifestyle that was characterized by sexual liberation and the search for spiritual enlightenment.

The rarely exhibited works of art in this show date from 1955 to 1970, and are drawn primarily from the Menil’s permanent collection, along with a few loans from other institutions and private collections. Altoon (1925-1969), who is not well known due to his untimely death at age 43, personifies Ferus Gallery with his mysterious, surrealist paintings and vaguely sexual drawings. The untitled colored-ink drawing (1961) in this show is more stripped down than most of his work.

A large freestanding sculpture by Kienholz (1927-1987) is a portrait of Hopps titled “Walter Hopps Hopps Hopps” (1959). The artist began with a found cardboard cutout of a male figure used to advertise motor oil. He transformed it into Hopps by adding his signature glasses and black suit, the jacket of which is pulled open to reveal miniature paintings by DeKooning, Kline and Pollack. The reference to stolen paintings may relate to an incident in 1957, when Wallace Berman (1926-1976) was arrested and charged with obscenity for artwork he had on display at Ferus. The reverse side of the sculpture displays a series of small compartments containing handwritten lists including “Major Artists I Want to Show” and “Important People w/Influence or Money.” Kienholz and Hopps were good friends until the end, and Hopps went on to organize his posthumous retrospective at the Whitney Museum of American Art in 1996.

Berman was a writer, poet and jazz aficionado, as well as an artist. An untitled Berman painting from 1957 reflects his interest in the Kabbalah and Jewish mysticism. Two Hebrew letters, one repeated twice, are drawn in ink on torn parchment, which is shellacked and mounted on primed canvas. Berman was interested in the Hebrew alphabet and sometimes painted individual letters on rocks in the environment. His only film, “Aleph,” was named for a letter of the Hebrew alphabet. After his arrest at Ferus Gallery, Berman never again showed in public. When George Herms (b. 1935) met Berman in 1955, he was inspired to begin experimenting with assemblage. “Greet the Circus With a Smile” (1961) is a life-sized sculpture created from a mannequin torso placed in a box and embellished with dozens of found objects, including photographs, a mirror, a light fixture, and even a toy airplane. Hopps regarded Herms as a top assemblage artist, and organized a 45-year survey of Herms’ work, titled “Hot Set," for the Santa Monica Museum of Art in 2005.

Mary Joan “Jay” DeFeo and Bruce Conner were Northern California artists who were close friends with Hopps and Berman. DeFeo (1929-1989) was an integral part of the Bay Area art scene in the 1950s and is best remembered for her monumental painting “The Rose,” which took eight years to create (1958-1966) and weighs over a ton. It is now in the collection of the Whitney Museum of American. Around the time DeFeo began creating “The Rose,” she also worked on a related drawing that she subsequently destroyed. A few surviving fragments have been reassembled for the first time for this show. Conner (1933-2008), first gained recognition for his mysterious sculptures assembled from found objects and often shrouded in nylon, which gave them a mummy-like quality. “Crucifixion” (1960) is an abstract figure on a cross, with thick black paint that covers the body and drips like blood.

Ferus Gallery closed in 1966, and gradually the Beat generation morphed into the hippy counter-culture movement. Jazz gave way to the Beatles and Rolling Stones, and Pop Art emerged as a driving force. It was the rebellious art of the Beat generation, however, with its emphasis on experimentation and innovation, that established the West Coast as a fertile ground for artists. Their influence can be felt to this day.