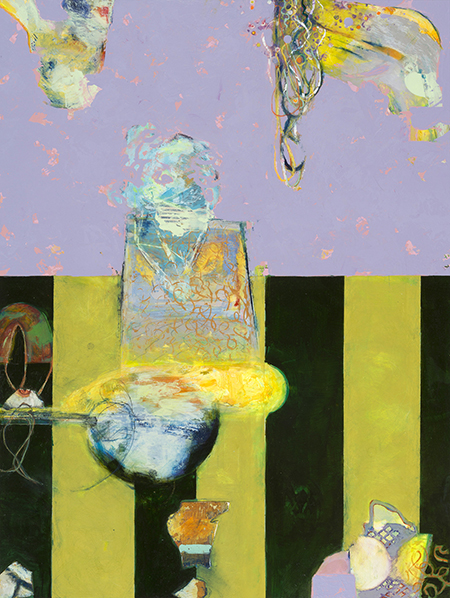 Make my funk the P-Funk, meaning in this case, the Postmodern Funk. It was the California Funk movement, by now largely historicized, that spawned legendary artists like Ed Kienholz, H.C. Westermann and Squeak Carnwath. Carnwath is the legend around whom “Symbol Pleasures" is built. She shares the room with Walter Robinson and Orlando Leyba. Her large black, blue candelabra picture, "Trip (always advisable)" encompasses the far wall of the main gallery and lives up to it’s name. The inhabitable image is an inner cosmic space. From the mysterious center streams Blake-ian rays of spectral light. Tomaselli type points and connecting lines spider-web the inner/stellar spaciousness. And it’s all accomplished in Carnwath’s signature impasto and scrawling art-brut line.

Walter Robinson has a wild and wooly imagination. His hi-gloss, Pop-surreal pieces sparkle, his concepts hover in the Louise Bourgeois zone of the psychological object. "Finger Bench" offers the opportunity to sit atop the finger of a sexy, black-skinned, giantess. The Argus-eyed, carrot-colored “Witness" recalls the bizarrely concocted creatures in the hilarious cult film "Big Man Japan." It’s aura of discomfort with its own orange form, baseball bat body, and lengthy nose hair is oddly contagious. It squirms and watches you squirm in an odd psycho-optic dance.

The three part funk-art harmony is rounded out with paintings by Albuquerque abstractionist Orlando Leyba. Not unlike Carnwath’s, you sense layered reworking, process and discovery that unites the personal with the universal. His visual language is far less figurative, however, and resides in a collusion of often obscured and always abstracted forms derived from his unique Norteño background, including its Moorish, Meso-American and Mexican roots. The Ebonics term has been mainstreamed as a synonym for a kind of free spirited authenticity, an expression of how styles born of necessity can cleverly eschew convention. While it is possible for things to get too funky (depending upon your thresholds), the art in this exhibition is generally, unlike our fracked mainstream culture, perfectly funked-up.