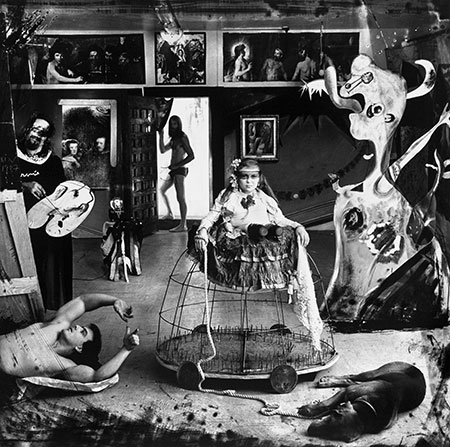 Prepare to be shocked and awed by the subject matter and contrasting artistic brilliance displayed by Jerome and Joel–Peter Witkin in “Twin Visions,” a unique joint exhibition of a generous selection of the celebrated siblings’ paintings, drawings and photographs. From humble beginnings in Queens, scarred by the broken marriage between their Jewish father and Catholic mother, the twin brothers early on found their respective means to examine the hidden recesses of human experience through art. Jerome takes a profound look at apocalyptic events with virtuoso figure painting on a grand scale in works like “The German Girl,” an examination of the lives of human beings victimized by the Holocaust.

Joel-Peter, a documentary photographer during the Vietnam War who photographed Coney Island side shows as a youth, is drawn to damaged outsiders and the physically deformed. Unlike Diane Arbus, whose iconic photographs picture the deviant and marginal in their natural surroundings, Witkin stages his productions, building sets, adjusting lighting and applying make-up to dramatize his fascination with the transitory nature of life. Art historical references incorporated into works such as “Las Meninas”  and “The Raft of George W. Bush” underscore the photographer’s infatuation with the splendor and misery of life, a key element to making this a captivating show.