A Mural Ordinance for Los Angeles
by Bill Lasarow 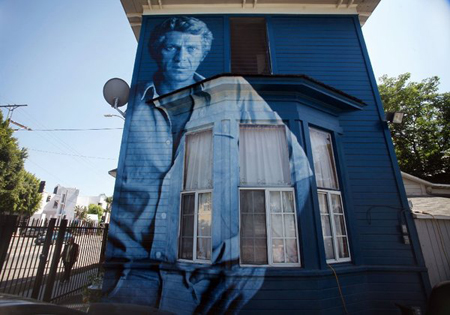 Since 2002, the city of Los Angeles has imposed a ban on all mural painting on private buildings. Above, Kent Twitchell's "Steve McQueen Monument," now destroyed (Photo courtesy of the Los Angeles Times).

There are a handful of good citizens of Los Angeles who have recently been busted for growing veggies on what are called "parkway strips" by officialdom. These are the lawn areas between the sidewalk and street curb, standard to most neighborhoods here. For the last two years L.A. City Council has tried to get an ordinance written to encourage rather than punish the sweet souls who work to put some extra edibles out there where any member of the public can partake. See, if one ass of a neighbor calls City Hall, the current city code requires that the good guy gets fined and the bad guy gets their way. Why is changing that idiotic regulation such a slow and difficult process? Gotta little story for you.

For more than a decade the same dumb situation reduced Los Angeles from boosterizing itself as "The Mural Capital of the World" to a public art burial ground. A poorly drafted ordinance from 1986 lead to the courts overturning it on first amendment grounds when a group of billboard companies whined that "if we can't put up our signs, then neither should those artists get to put up their murals!" The law was so badly written that the adolescent hissy fit proved the better argument. So the court and the city slapped a ban on everybody.

For over a decade nice ladies in the San Fernando Valley would hire well behaved kids to paint pictures on, say, a fence facing an alley. Some Mr. Wilson down the block would complain that these kids, who surely must hate America, offended his refined sensibilities, and city officials were johnny-on-the-spot scaring the bejesus out of the nice lady. Such murals quickly disappeared under threat of fine. Completely unconstitutional of course, but most folks simply comply when threatened.  A number of very public murals, enjoying no official recognition whatever, fell like trees in the forest, though at least visible to a number of disapproving eyes.

The more invisible effect is made clear by this question: What self-respecting artist (or their representative art dealer) would risk significant effort to create a world class mural when the city offered it no official status or protection? Even when the State of California and the City of Los Angeles collaborated to invest around $2 million on the crown jewels of L.A.'s murals, the Olympic Freeway Murals, what happened? Within two years money earmarked for annual maintenance was eliminated, and the $2 million investment was seemingly flushed down the toilet amidst a flood of graffiti tags. Without any policy except a ban nobody was answerable or liable.

Disclosure time: I co-founded a little NGO with artist Kent Twitchell some years ago called the Mural Conservancy of Los Angeles. Its Executive Director, Isabel Rojas-Williams, has worked some miracles over the last two years to not only bring those crown jewels back to life, but she has worked tirelessly with the City to draft a modern Mural Ordinance to replace the ban. I've had the opportunity to witness some of the sausage getting made, and let me tell you it ain't easy, especially when you don't have zillions of dollars to shower on paid lobbyists, advertising campaigns, and political back slapping. I happen to favor public servants who mainly want to perform their civic duty and improve the city, not line a few pockets at its expense.

It happens that the L.A. City Council will probably cast their vote on this new Mural Ordinance very soon, possibly during August (so I am told). Thanks to Isabel, MCLA, and some very good folks at City Hall such as the newly elected Mayor and the Councilman representing the 14th District, though it is hardly perfect, there is not much in the imminent new law to complain about. So I'm going to pass on any grousing about particulars here to tell you that yes, it is possible. Not easy, not simple, not perfect. But the result will be very good indeed in bringing about fresh creative opportunities. Artists interested in grand public statements have a better chance that they will be lasting ones. And they and their dealers might very well attract new business that up until now has simply not been feasible. Lots of other businesses and neighborhoods figure to reap both cultural and economic benefits as well. I tell you: this new law is well designed to move us in those positive directions. If we pay attention.

And if Los Angeles can learn to take better care of a few murals, I'm certain that more veggies along those parkway strips are also part of Los Angeles' future. You can grow some gardens in your town too.