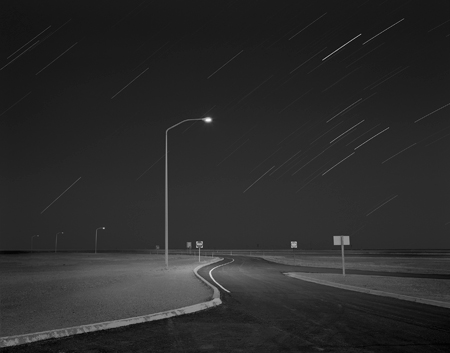 Brian Kosoff’s work in his current show, titled “The Illumination of Night,” is suffused with luminosity. His aesthetic is gorgeously pared back, “Highway Lights, 2012” being a case in point. It focuses our attention on the shape of a curving road and a street lamp juxtaposed with signs and star trails. (Kosoff uses long exposures that allow him to capture planetary movement.) The image operates as a metaphor for roads taken and directions conferred upon us — it's a stunning visual calculus. The artist deftly merges heaven and earth without any hint of preaching. His subtlety is precisely why this and other images are so affecting.

“Tracks, 2012” is similarly spectacular. Mountainous terrain reminiscent of the American Southwest is a backdrop for train tracks, telephone lines and, yet again, the marvelous curvature of glittering planetary rotation. It shows us the place where time and eternity meet; Kosoff captures the intersection with rare nuance. “Windmill, 2012” is fascinating because it shows us two kinds of circularity — the blades of farm machinery and the physics of a nighttime sky. It’s a ramped up juxtaposition that makes us ponder our puny erector set-like constructs when compared to the stuff of creation. For my money, that’s plenty good. Great even.