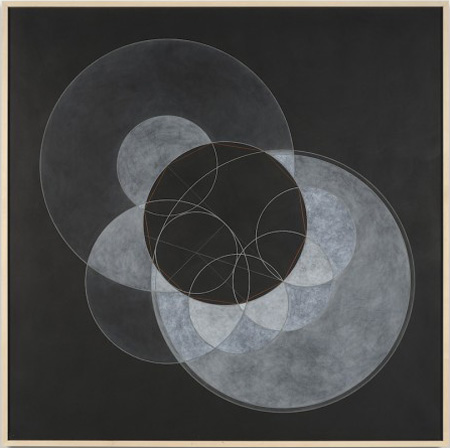 The battle between reason and emotion has deep historical roots in art. In the early 19th century there was Neoclassism versus Romanticism; then there was the utopian and dystopian wings of modernism in the twentieth. In current discourse, that conflict between human Lapiths and bestial Centaurs takes shape as a clash between culture and nature, one that favored the former a generation ago, but only for a time. In recent years we have come to see culture in more traditional, modest terms — as a subset of nature.

Christopher Badger’s "Lunar Mirrors" focus on the mathematics of astronomy — the rigorous simplification required to construct analytical models — and the elusive realities of the material world—in this case, the moon, that mutable satellite that affects both the tides and, if you believe in astrology, the affairs of men. A previous sculpture by this Los Angeles-based conceptual artist and musician, "Monument To Secrets Lost In The Night Of Time," took the form of a large irregular seven-sided polygon (or heptagon) fabricated from door-frame components. The meta-object contained smaller concentric heptagons, like nesting Russian dolls, framing a central aperture.

With this new work Badger divides his interests in mathematics and randomness or irregularity, previously combined, into 2D and 3D works, respectively. Square-format drawings or paintings in chalk and oil paint on black gessoed panels suggest blackboards as well as astronomical charts. "Lunar Mirrors" are silvery cast-aluminum moonscapes, replete with mountains, craters and fissures. Some of them are wall-mounted, while others are floor-mounted, atop short-legged tables. They invoke the moon’s historical identity as earth’s withdrawn, ghostly partner or, in mythic terms, the female yang to the sun’s complementary yin.

The elegant minimalism of Badger’s astronomical charts or diagrams emphasizes the antique rationality of Newtonian physics, with perfect spheres, variously illuminated, pictured in their various aspects and phases, or illustrating, in the polygon pieces, with their circular orbits and trajectories, that planetary bodies obey physical laws. This is a readily comprehensible, navigable Renaissance space, even if it’s airless. The seven-foot-square "Shadow Phase" presents a circle of sixteen circular moons, at various degrees of illumination, with a full moon at noon and a new moon a six o’clock. Slightly larger circles are inscribed in white lines both inside and outside the circular cycle, tangent to the shaded moons. It's all steeped in orderly progression, closer to the aesthetically appealing but mathematically and astronomically impossible crystal sphere’s of the Ptolemaic system, the Divine Clockwork universe long since shattered by modern scientific knowledge.

"The Construction 3-15" series, comprised of four-foot-square works, uses polygons of various types, centered in the black image field, to generate various circular projections, which are tinted in various gray shades, suggesting lens flare, gravitational fields, ionization zones, etc. The geometric solids of trigon, tetragon, pentagon, hexagon, octagon decagon, dodecagon, and pentadecagon, with their three to fifteen sides, thus take on cosmic, symbolic and even, if you are a peruser of alchemical, theosophical, or religious publications, mystical implications.

The more random, contingent nature of reality is reflected, literally, in the shiny but optically distorted surfaces of Badger’s "Lunar Mirrors," which are derived from 1974 Apollo 15 photographs. Necho, Proclus Crater, Rima Dawes, Rima Hadley and King Central Peaks may be accurate models of real places, but they’re imperfect objects of contemplation and poor vehicles for self-scrutiny; to this Pacific Coaster, the nacreous surfaces suggest abalone shells, or perhaps the liquid-mercury rivers entombed, along with his clay armies, with the First Chinese Emperor.