The End of the Wild
at Modified Arts, Phoenix, Arizona
Recommendation by Deborah Ross 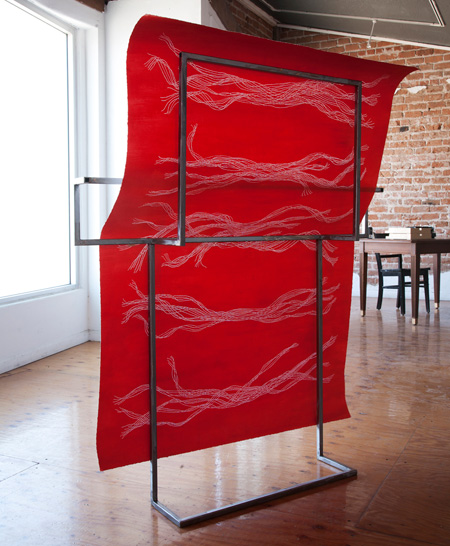 Man versus nature is a conflict yet to be settled, as this small gathering of installation art, photographs and other media demonstrates. As it wrestles with ideas about human interaction with the natural world, "The End of the Wild" summons up humor, pathos and pessimism. Part of the humor comes from a section of wall devoted to several official-looking papers from a mock agency called the Department of Nocturnal Affairs. The artists behind the project document night sightings of animals and fill out "reports," such as that of a spider "dancing around the bathmat." Another humorous piece is Kelsey Vance's small photograph "REM 59d," in which a deer studies a bulletin board in an office where a deer head is ironically mounted on a nearby wall.

The exhibit turns to deeper contemplation about preserving nature's beauty with an impressive sculpture by Dominic Paul Miller. In "five bird songs, crushed and folded" red and white rag paper gently hangs over a steel stand; the paper has been hand-pierced in hundreds of places to resemble undulating lines of music. Meanwhile, pessimism comes through in "Eucalyptus Carvers," a floor display in which an artists' group that calls itself Unmanned Minerals has fashioned lines of poetry on several pieces of eucalyptus bark. One line reads, "A path is a misunderstanding laid bare." Has it really come to the point where humanity has impinged on every wild place, animal and plant? Sometimes art can force us to face the issue.