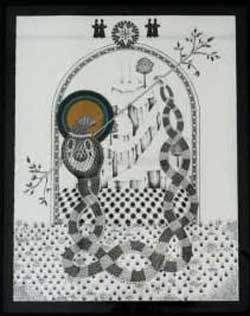 Known for his small, symbol-laden paintings in the style of the Flemish masters, James Smolleck ventures here into large-scale installation, "Neophyte Doublestare into the Eighth Dimension." He transforms the front rooms of this community gallery, housed in one-half of a ramshackle duplex, into an enigmatic, vaguely Renaissance-style ritual space.  Large, primarily black-and-white ink drawings of mysterious alchemists and human/animal hybrids are arrayed on the recently painted (by the artist) white walls.

A procession of golden honeybees rises from a hive up to the priestess’ bed chamber. A curving cobra is pierced by a tree limb. Wearing Buster Brown shoes, a nude male figure with a ram’s head attends to a monstrous bird, sporting a female head, that is urinating a golden stream into a bowl. The floor of the gallery, also revamped by Smolleck, is now covered with a black-and-white checkerboard pattern with a giant circle cut out, which appears in the next room with a jagged dagger running around its edge. Smolleck’s play of subconscious symbols is a metaphysical puzzle, a fantasy flavored installation that eerily lifts the veil to another dimension.