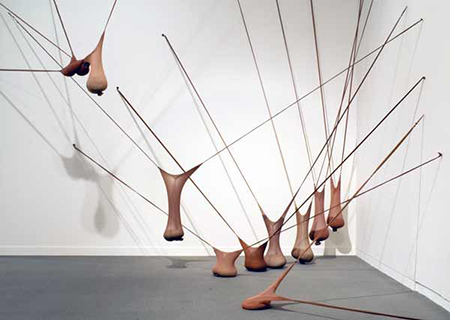 Senga Nengudi came of age as an artist in Los Angeles and New York in the 1970s, a pivotal era when young artists felt free — even obliged — to experiment with materials and methods. Artists also joined in the urgent political discussions of race (Nengudi is African American) and gender then percolating in the air. Early on she began using nylon stockings in her work (pantyhose being closely identified with women) and, as she once said in a talk at the Museum of Contemporary Art Denver, “When a woman wears panty hose, it’s usually under a stressful situation.  They're going on a job interview, they're going to a dance … there's a lot of tension when you're wearing pantyhose."

“Senga Nengudi: Improvisational Gestures” includes 14 of her mixed media works, which incorporate nylon and other materials, plus four works on paper, six videos, and a number of photographs. It features selections from her best known series, “R.S.V.P.,” including a classic photograph from 1977 which depicts her nylon sculpture being activated by Maren Hassinger, a fellow artist who had also studied dance. In the photo Hassinger is balanced on her buttocks, legs pointed skyward in a V shape. The nylon has been stretched from points on the wall to her forehead, torso, and legs. It speaks eloquently to both tension, the nylon being a visible manifestation of the taut pull between two points, and to equilibrium, as the subject tries to negotiate a balance with external forces.

There will be also a more recent version of the "R.S.V.P." series, "Untitled (R.S.V.P.)" (2013), a physical sculpture of stretched nylon. Here the waist of the pantyhose is attached to the wall, while the feet have been filled with sand, and appear to be trying to walk away from the wall. There is something both hilarious and harrowing about the work. Nengudi moves beyond nylon, incorporating other materials in her sculpture: wooden slats in “Nuki Nuki: Across 118th Street” (1982/2015), and found objects in others.

The artist was born in Chicago but grew up in Los Angeles and Pasadena. She studied dance and art, then spent a year in Japan absorbing Japanese culture before returned to Los Angeles to obtain an MA in sculpture from Cal State LA in 1971. She was part of the seminal movement that has been called the L.A. Rebellion, along with Hassinger, David Hammons, Barbara McCullough, John Outterbridge and Noah Purifoy, before moving to New York. She eventually settled in Colorado Springs, where she has a teaching position at the University of Colorado.

Nengudi's work successfully and powerfully bridges sculpture and performance. Her “R.S.V.P." series began in 1975, and in its early iterations she and Hassinger would move and dance in nets of stretched nylon, a powerful visual metaphor about the socio-political restrictions imposed on women, and on the balancing act it takes to negotiate simply being female in society. But there is another side to it as well. “This work is really about my psyche," she said in that Denver talk. "I was pregnant ... fascinated by the way my body was expanding and changing. I was fascinated by the elasticity of the body, and of the human spirit.”