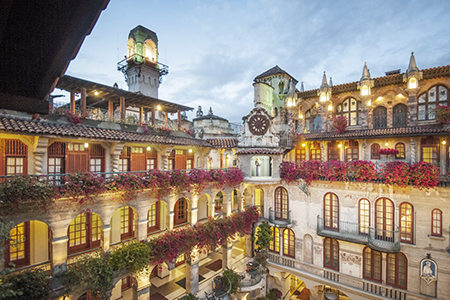 Though reduced now to a clutch of stylistic clichés (red tile roofs, stucco, arches, and vestigial espadañas) embellishing the most generic structures, Spanish Colonial Revival (SCR) architecture in its early 20th century heyday aspired to a grander ambition. It was designed to endow the future Golden State with a ready-made fabricated history that would hide from view the grubby details of Spanish and American frontier conquest, erase the region’s Mexican character, and paint over them a picture of an opulent and romantic Euro-Spanish past that would entice Anglo tourists and prospective investors and settlers from the Eastern states. Like the phantasmagoria that Walt Disney would later construct in Anaheim, SCR was an exercise in mythic set-building.

The host Riverside Art Museum is itself housed within an SCR building originally designed as a YWCA by Julia Morgan (best known as William Randolph Hearst’s castle architect ). The Getty-funded Pacific Standard Time: LA/LA exhibition “Myth and Mirage: Inland Southern California, Birthplace of the Spanish Colonial Revival” surveys the invention and development of SCR in the Inland Empire.

In the words of Catherine Gudis, who wrote the introduction of the indispensable catalog that accompanies the exhibition, SCR gave Southern California a “usable past” that envisioned the state as “European and ‘civilized,' matching its Mediterranean climate and contradicting naysayers who saw the region as still a Western cow town and rough frontier. American hispanophilia also created continuities between the Spanish colonial enterprise and American expansion, naturalizing and justifying Anglos as the heirs to that Spanish enterprise ...” Thus, for Gudis, SCR was an enabler of “collective amnesia.”

This harsh assessment is softened in the exhibition and the catalog by the attention paid to the remarkable inventiveness that animated the development of the style, and the undeniable splendor of the results. The paramount example would be Morgan’s Hearst Castle, but that grandiose folly is outside the purview of the Riverside exhibition. Instead, curatorial attention is lavished on Frank Miller’s no-less-extraordinary Mission Inn. This architectural hodgepodge, to which several architects, most notably Arthur Benton, contributed their talent, was designed around Miller’s magpie-like acquisitions of Spanish, Italian and Mexican art and furniture. In the words of the late California State Librarian Kevin Starr, Mission Inn consumed 35 years of Miller’s “architectural fantasizing,” which he invested in creating a “Spanish Revival Oz: a neo-Franciscan fantasy of courts, patios, halls, archways, and domes.”

Architectural renderings and period and contemporary photographs reveal the eccentric sumptuousness that came of Miller’s obsession. Because no actual Spanish mission was ever constructed in Riverside, Miller even took it upon himself to add to the inn an unconsecrated wedding chapel that featured, along with an altar imported from a family chapel in Mexico, dazzling stained glass windows designed by Tiffany. Getty Foundation curator Lindsey Rossi describes the outcome of Miller’s efforts as a “grand spectacle of romanticization and obfuscation.” That, of course, could be said of just about all grand architecture stretching back to prehistory. After awhile, such curatorial moralizing starts to grate.

In any case, by the mid-forties, SCR had fallen out of elite fashion and quickly degraded into what Aaron Betsky calls a vernacular style. Today, its vestiges are applied with the promiscuity of sprayed stucco to every type of commercial or residential architecture that requires perfunctory California branding. The exhibition documents countless examples ranging from fast food outlets to dialysis centers.

Unlike the pioneering instances of the genre, this “refried” SCR lacks mythical potency and performs a strictly homogenizing function. The quaint if deluded vision of SoCal as a transposition of Mediterranean gentility has long since succumbed to more dystopian scenarios. In this context, one is apt to regard wistfully the acts of cultural misappropriation documented by this exhibition.