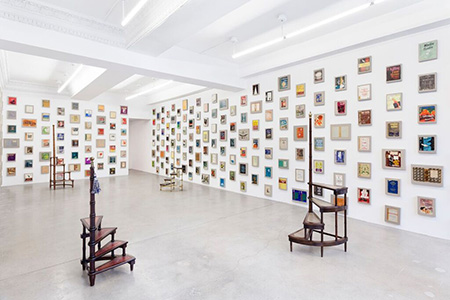 For Pacific Standard Time: LA/LA, the participating Santa Barbara Museum of Art presents Valeska Soares, "Any Moment Now.” This expansive exhibition is installed chronologically, including more than forty-five works dated from the mid-1990s to the present. Among the earliest works are "Untitled 01 (Preserve)” (1991) and “Pathalogies” (1994), pieces about desire and decay. Using long stem red roses, Soares recreates "Untitled 01 (Preserve)." In this piece, the flowers are wrapped in cotton spirals and exhibited in clusters, which are allowed to decay during the course of the exhibit.

Soares has a history of using found materials in her works. As artist Vik Muniz remarked, she removes objects from their historical settings and original functions so as to transform them into poetic sculptures and environments, in so doing imbuing them with new life in new contexts. Soares explains, "I’m fascinated by ephemeral things; I’m giving people triggers that activate memories and contexts, and they create their own narratives. Each piece has multiple readings depending on who is seeing it. There is no fixed meaning."

Soares was born in Brazil in 1957 and since 1992 has been living in New York. She received a Bachelor of Architecture degree from the Universidade Santa Úrsula, Rio de Janiero (1987) and completed a postgraduate diploma in the History of Art and Architecture from the Rio based Pontificia Universidade Católica (1990). Soares also holds an MFA from Pratt Institute (1994). She is connected to the generation of artists who began exhibiting in Brazil in the late 1980s and early 1990s, including Jac Leirner, Cildo Meireles, Vik Muniz, Ernesto Neto and Adriana Varejão among others. Her works are also often also associated with the sensibilities of Brazilian artists Lygia Clark, Hélio Oiticica, and Lygia Pape.

Soares' installation and sculptural works have been exhibited world-wide, including presentations at the Sao Paulo Biennial (1994, 1998 and 2009) and the Venice Biennale (2005, 2011). Although her works were exhibited at the Christopher Grimes Gallery in 1998 and she recently created a site specific installation for the Wadsworth Atheneum in Hartford, CT (2017), her works have not been widely seen in Southern California or the United States.

In considering the trajectory of her work, there are consistent themes that link the diverse use of materials. One such theme is language and the adaptation of found book covers into evocative installations. Soares' “Bindings" series displays antique book covers chosen for their titles and formal qualities. They are mounted to linen panels and arranged so their covers and spines lay flat. In works such as "The Scarlet Letter (from Bindings)” (2011) and "Amerika (from Bindings)” (2012), Soares creates visual, textual and poetic relationships. The “Bindings" series relates directly to the title piece of the exhibition, "Any Moment Now” (2014). This is an immersive, multi-wall work that consists of 365 dust jackets whose titles reference time. The book covers are individually mounted to linen panels and hung salon style on the gallery walls. Each wall represents a different season. How one creates a narrative between the texts and images in order to ascertain meaning is up to the viewer. The installation becomes a puzzle of sorts, as there are 365 covers, one for each day of the year, prompting the question, is the work a calendar or a library? The library reference is further suggested through the placement of portable spiral ladders that become thwarted invitations to ascend.

Soares has indicated that her work/process is about systems that function outside of reason. She is interested in language as well as spaces. Drawing from her training as an architect, she constructs contemplative environments that offer viewers aesthetic and conceptual experiences. A 2010 work entitled "Un-rest" consists of 128 found footstools and one glass chair. The footstools fan out from the base of the almost invisible chair, creating an arc on the gallery floor. While the singular chair is ghost-like and transparent, the footstools come from different eras and are a colorful array of embroidery and decoration that reference a myriad of unknown histories. A recent sculpture titled "Lugar Comum” (2016) consists of four interconnected wooden chairs. Each chair faces one another as they would at a table for four. However their caning has been woven together, rendering them non-functional. The piece references furniture, minimalist sculpture as well as relational aesthetics, as one tries to imagine what would happen if the chairs were in use.

Soares uses a wide range of media to produce thoughtful artworks that engage viewers on many levels. Her pieces have an immediate aesthetic appeal because she has a keen sense of materials and materiality. While some of her sculptures are fabricated (ceramic, metal or marble), others utilize found materials like books, footstools, headboards and library staircases. Each element is carefully chosen for its visual appeal as well as what it stands for. In "Fainting Couch” (2002) a hard edged metal mirrored bench with a perforated top and a pillow of rolled white fabric is inviting, but also inhibits reclining as the work emits a heavy scent of Stargazer lily, which is so pervasive it could cause one to become faint. The push-pull dichotomies and and contradictory signals implied in this work resonate in personal as well as universal ways.