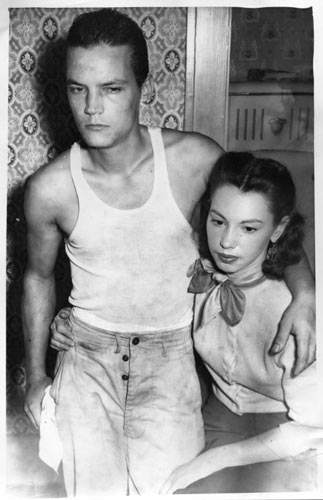 In the early 1950s, Houston was considered the murder capital of the nation. Back then, newspaper accounts of daily killings read like the pages of pulp detective novels. In other cities, Houston’s crime stories carried an almost mythical stature, and Houstonians were seen as lawless and gun crazy, with a penchant for “blasting a little daylight into a firm friend or drunken companion,” in the words of Robert C. Ruark, a reporter for Washington state’s Tri City Herald. The wave of homicides kept the newspapers busy, and the now-defunct daily Houston Press was eager for crime-scene coverage, even hiring inexperienced freelance photographers as long as they had the moxie to track down the next warm corpse.

Marvin Zindler was in his early 30s at this time, and the photographs on display in “Bayou City Noir: The Photography of Marvin Zindler” provide an intriguing window into the beloved, larger-than-life character Zindler would later become for generations of Houstonians. When we talk about Marvin Zindler, we talk about the Chicken Ranch (immortalized in the musical The Best Little Whorehouse in Texas), his rat-and-roach restaurant reports, his humanitarian work and his signature sign-off as ABC Channel 13’s flamboyant consumer reporter: “MARVIN ZINDLER, EYYYYYYE-Witness News!” But this show presents a side of Zindler few have ever seen: seedy, voyeuristic, even lurid.

Zindler’s Speed Graphic camera captured bullet-riddled bodies, mothers in mourning, just-caught kidnappers and carjackers, dope fiends and dice-running strippers. In one photo, detectives with freshly lit cigarettes dangling from their lips take a grieving widow into custody — she had accidentally shot her husband while playing with a pistol she thought was unloaded. Zindler was partial to victims of brutal beatings, maimed bodies being loaded into ambulances and cops posing with apprehended criminals. The most intriguing aspect depicted is the insinuated corruption among the Houston Police, with uncaptioned shots of cops obviously enjoying Zindler’s presence. They play to the camera, not afraid to exploit criminals in custody or to cavort with bystanders. It speaks to the chaos of the times and the emotional gravity of a booming city awash in a crime wave. Zindler’s captions provide a narrative account for some images. One, dated December 22, 1952, of two officers with two freshly handcuffed hoods: “Picking up two hitchhikers, robbing them and running them down the road with bullets was big sport for Walter Thomas Cook, 30, and his 16-year-old brother-in-law Troy Lee Boswell. Officers broke it up in the 200 block of McCarty.”

Several photos display the pencil marks used to outline a subject’s body or hairstyle, applied directly to the photographic print to better render the image on newsprint — a popular practice at the time. Blown up large, those details add ghostly and skillful embellishment to the scenes, as well as an acknowledgment of style and fashion (another rewarding aspect of the exhibit).

The role of sex in these images ratchets up the ‘noir’ label. Beyond the polygamists, vice arrests and teenage-love-crimes that Zindler documented, he also had an eye for girls in swimsuits. One photo in particular embodies the way we shift seamlessly from gawking at sensational crime news to consuming sex-and-celebrity fluff. It’s a photo of a blonde bathing beauty taken at the infamous Shamrock Hotel pool in June, 1953. Zindler’s caption says it all: “Connie is one third of the Dupree Trio, currently dancing at the hotel. She’s 18 and from Hollywood, but she likes that Texas sun. She sure is cute.”