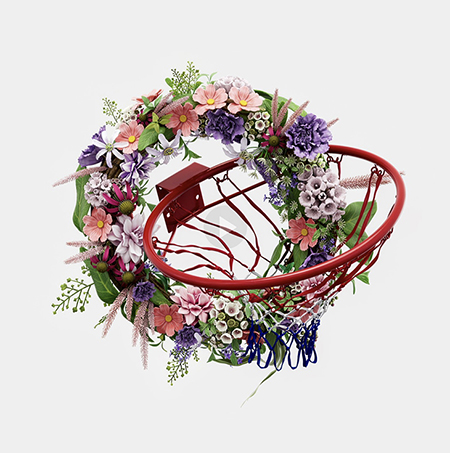 Hundreds of found objects in all shapes and sizes from Urs Fischer's series “CHAOƧ #1 – #500” sit on long tables in the lobby area of the former Marciano Art Foundation building. These discarded, often broken and dilapidated 'things' range from small toys to statues, electronic gadgets and clothing, as well as tools, a manikin and even a plastic Christmas tree. The collection of objects are ordinary in every way and represent a range of 'stuff' that is no longer of use and that normally finds its way into dumpsters or onto the street. Fischer, in a sense, rescues and restores them to their 'factory settings,' presenting them in the next room as projections. Unscarred and like new, these digital renditions are composited from high tech and sophisticated 3D scans. Each of the 500 objects has been recorded from every vantage point and is shown in a pair oscillating against a white shadowless background, morphing into and merging with each other. While it is interesting to think about the transformation of the discarded “things” into something that is now pristine, what makes Fischer's project unique and interesting are the scale shifts and the uncanny and unexpected relationships that sometimes occur when the objects intersect.

The casual display of the actual objects functions as an introduction or a teaser to the projected works. They are in essence the source material rather than the final product. The “digital sculptures” presented as videos are the culmination of Fischer's “CHAOƧ” endeavor.

Suspended toward the back of the darkened theater-sized space are three huge screens that simultaneously display Fischer's intertwining montages, each snippet lasting between one and three minutes. There is also a large, open grand piano where the musician Pete Drungle performs solo improvisations in response to Fischer’s constantly changing duets. The space is homey, filled with an assortment of furniture — funky and unmatched couches and chairs that invite viewers to sit, relax and take in the five-plus hour loop of object combinations. Fischer's project calls to mind other artists, such as Tony Cragg, Mike Kelley, Mark Dion and Sara Sze, who have collected and transformed throwaways into new artworks. Rather than re-present the originals as the end product, Fischer presents the virtual 3D renditions. While numerous other artists have created scanned objects as photographs, Fischer may be the first to explore the nuances of combining these scans into animated videos.

Fischer's combinations seem arbitrary: an alarm clock combined with handcuffs, a small guitar with a stainless steel faucet, an army jacket with a Chinese vase, an espresso cup with a ping-pong paddle, a light bulb with an hourglass, a Madonna statue with a red plastic straw that spells 'babe.' As the red straw passes through the statue, it somersaults across the length of her body, both fusing with it as well as cutting it apart. No matter how they intersect, the objects twirl as if in constant free-fall. When two things of like sizes and materials are combined (such as the handcuffs and alarm clock), it is less interesting than when there are obvious shifts in scale and materiality, as in the Madonna and straw or the guitar and faucet.

While the individual objects spin independently in slow motion in all directions, they are designed to intersect. One object often disappears into the other, only to reemerge on the other side to create jarring and unexpected digital artifacts. Seen in combination, the two objects are in constant motion, fluid and solid simultaneously. There is something cartoonish and surreal about the movement. The way their forms dissolve and regenerate is akin to the sci-fi effects in “The Terminator”: a breaking apart or melting away that immediately resurrects itself.

Why Fischer chose to show the same animation rather than different combinations on all three screens is perplexing, as the differences in the relationships between the paired objects is what makes the work unique. Their larger than life screening gives the objects a power that transcends their function and banal identity, turning them into monstrous curiosities that are impactful as well as amusing. The relationship between the actual objects and their scanned versions can be complex, and poses questions about how technology can alter our notions of decay, perfection, and purpose.