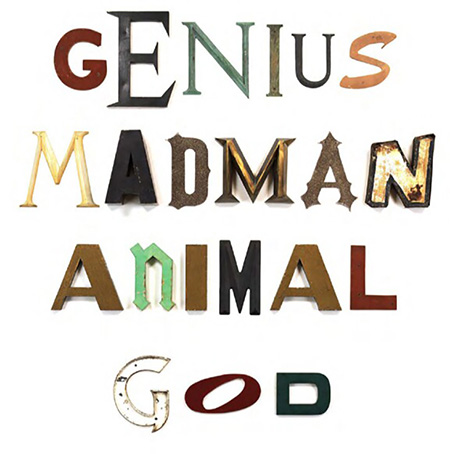 “Less and more,” the title of Jack Pierson’s 36-year survey, is something of a misnomer. It hardly describes the considerable breadth of the works on view. Although Pierson was trained in photography in the 1980s and is considered a member of the Boston School, he quickly expanded his repertoire of mediums in the 1990s, when he began making word sculptures from abandoned industrial letters that once formed the signage on movie marquis, storefronts and other such locations. Installed non-chronologically, the exhibition demonstrates that Pierson can shift gears from photography to sculpture to painting to drawing to collage to installation with remarkable ease.

Pierson’s word sculptures are themselves quite diverse. They can take the form of a single word, a string of words, short phrases or abstractions that emphasize shape and colors. A striking example of the latter is “Abstract #2” (2007), where the letters are arranged in a configuration that recalls Russian Constructivism, with a few red taillights thrown in that add a little whimsy. Similarly playful is “IN CIRCLES” (2014), where the letter ‘O’ is itself formed by a circular positioning of eleven different examples of the letter ‘O’. As is his custom, Pierson mixes up letters of different fonts, sizes, colors, and textures, thereby reinforcing the idea that we are viewing an artwork and not a sign. In “Genius Madman Animal God” (2020), the composition is animated by the interactions of varied surface textures. As a clever word poem, it is also very timely. Assembled together during the last election cycle, the words have all been used to describe Donald Trump.

Pierson also uses text in many of his drawings, which read like random thoughts or journal entries on themes that permeate his oeuvre, such as queer identity, relationships and desires. Several of the recent word drawings, created while in lockdown, recall Jenny Holzer’s well-known truisms, only they are handwritten, largely apolitical and convey a hint of sarcasm. Among the short quips are phrases such as “He Wants it All and So Do I and So Does Everybody Else,” “As Beautiful and Romantic As It Was People's Lives Were Ruined There,” and “Famous Last Words,” appropriately installed at the end of a string of these drawings.

Much of Pierson’s inspiration comes from daily life experiences and, not surprisingly, his art is largely autobiographical. “Diamond Life” (1990), for example, is a stellar installation in which Pierson recreates a section of his modest living room from when he was a struggling artist living in Miami Beach in 1983. Set against a wall section painted yellow and positioned over linoleum flooring, the installation includes a chair and a table with a cigarette-butt-filled ashtray. An open drawer contains multiple cigarette packages. Also on the table are a coffee can filled with artificial flowers, a votive candle, assorted books, one of the artist’s early small sculptures, and a vintage record player playing vinyl records of the ‘50s and ‘60s through stereo speakers. The album covers, some of which Pierson has altered with paint, are propped up against a table leg. A sprig of ocean fauna, a reference to the location, hangs as a memento on the wall.

One of Pierson’s most original projects is his ongoing series of “Self Portraits,” which are not really self portraits at all. Rather, they are projections of how he might see himself in the more perfect world of one’s idealized myths and dreams. The series began in 1993 with the collage “Self Portrait (James Dean),” for which he arranged several articles on the life and death of the Hollywood legend into a simple grid. At the time, Pierson had recently been diagnosed as HIV+ and, naturally, was thinking about the possibility of dying young like Dean. Many of Pierson’s “Self Portraits” are photographs of beautiful young men, with the most recent example being a large, scanned image, appropriated from an outside source, of a young man resembling Jesus Christ, clad only in underwear and scarred with flesh wounds across his chest. The title “Nein, das ist nicht der geschundene Christus,” which is German for “This is not the battered Christ,” which appears at the bottom of the page, followed by the German for “nor is it the artist Jack Pierson,” and “He only photographed the model and named the picture Self Portrait #25.”

Although much of Pierson’s creative output can be witty or deadpan, his true versatility is revealed in a series of abstract watercolors painted with his fingers in 1994. The “Blue Spot” series began with funny musings about wanting to have a “Blue Period” because Picasso had one. There is also the idea of painting blue ovoid shapes with human digits as a visual pun on the zeros that appear in digital computer code. The resultant watercolors are as aesthetically sumptuous as can be. Without using any words at all, these beautiful abstractions come across as Pierson’s most passionate expressions of longing, desire, and the sensuousness of human touch.