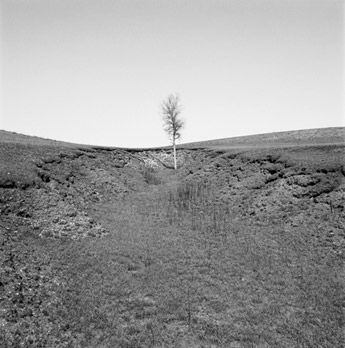 Joe Deal's final works, "West and West," on view this summer at the Center for Creative Photography in Tucson, made one last shift in a four-decade photographic career that contended with convention. Deal, who passed away this June 22 after a long illness at age 62, came to prominence as a leader in the revolt against the romantic tradition in landscape photography favored by Ansel Adams and Edward Weston. His work first drew attention in the 1975 group exhibition "New Topographics: Photographs of a Man-Altered Landscape" at George Eastman House, where he was also an exhibitions director. The photographs eschewed heroic depictions of a pristine nature, picturing instead the wreckage to the land effected by indiscriminate development in the West. His career included positions at Washington University in St. Louis and Rhode Island School of Design and at the University of California, Riverside, where he helped found the California Museum of Photography. His work through the 1980s continued explorations of habitation and terrain but shortened the focus at times to include human figures; "Subdividing the Inland Basin," some of his best known work, documented Los Angeles suburbia with an affectless gaze that recalls the street photography of Garry Winogrand.

The "West and West" images are striking in their austerity, and for their complete lack of human trace. For the viewer familiar with Deal's earlier works, this work may jar expectations, but this is no capitulation to mundane romanticism. The human presence is here--in the photographerÕs gaze. The series places the horizon in each photograph unconventionally in the center of the composition, emphasizing the square format, which Deal utilizes to portray through allusion the surveyor's grid that mapped the Great Plains after the Kansas-Nebraska Act of 1854. Deal, who was born in Kansas, traveled through the country he had known as a child in his last years, and wrote of this project that he "wanted to try to look beneath the grid and to re-image something that now can exist only as an idea."

This conceit emphasizes objectivity and machination, but results in revealing bits of landscape that shift radically from view to view--dust storms, rock fields, distant plains, sky surging with clouds and occasionally the odd lost tree or two. Underlying this array is a compulsion to fix the scene weighted to the center of the frame, as if the photographer tried to hold the sky and land from flying apart, or grasp onto impossible memories.