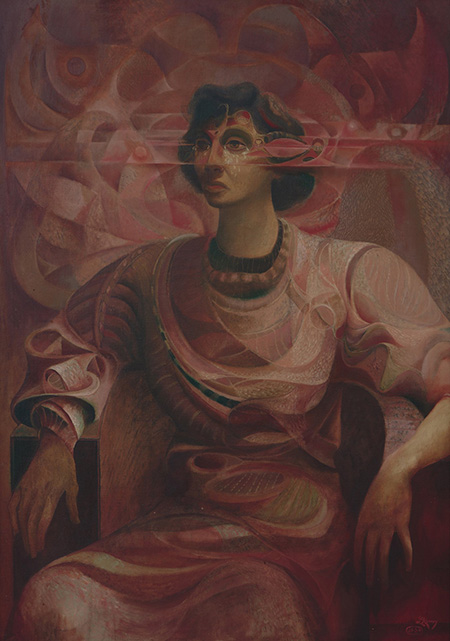 Cascadia Art Museum has held over its path-breaking survey of gay art in Washington State, “The Lavender Palette: Gay Culture and the Art of Washington State,” but reduced it in size to “Excerpts.” Even so, this is a fascinating dive into an overlooked chapter in regional art history, art and craft by male homosexuals and lesbians. It is now widely known that the most important art-historical group in the area, the “Northwest Mystics,” was comprised of three gay men — Mark Tobey, Morris Graves and Guy Irving Anderson — and one bisexual, Kenneth Callahan. “The Lavender Palette” omits Callahan and substitutes Leo Kenney as the fourth of the so-called “Big Four.”

Despite their greater fame, the new “Big Four” are enclosed in a context of many other gay artists working in the 20th century, none of whom ever attained comparable recognition. We learn about a whole new group of artists who enriched the art scene, depicted gay themes openly in some cases, but in many other cases pursued closeted subjects. Unravelling the complicated dances these artists had to perform — homosexuality was still illegal — in order to create the same-sex subcultures their art spoke to, various symbolic strategies were employed. Architects, interior designers, schoolteachers, ceramists, fiber artists and others worked steadily throughout the period (1921-1974), often with low profiles that denied them the mainstream recognition Tobey & Company received in Seattle, San Francisco and elsewhere.

The nineteen male and female artists include better known ancillary figures such as Ward Corley and Malcolm Roberts (the area’s first Surrealist). Corley, who died tragically at age 42, was a close associate of gestural abstractionist William Ivey. Jule Kullberg’s “Surf Watchers” (c. 1955) is probably two women in men’s clothing on a cliff overlooking the ocean. Less modest are watercolors by Delbert J. McBride, a major discovery of the survey. “Drag Queen” (1948) is a big-nosed guy with make-up, while two “Untitled” works from 1950 focus on nude swimmers in rowboats. Roberts’ “After Pericles” (1937) poses two dancers in tights without shirts, distinctly different from his dreamy nighttime scenes of Seattle. The title refers to the iconic Athenian statesman who presided during Greece’s heyday of both power and homosexuality. Other historical precedents are invoked in two black-and-white ink drawings by Mac Harshberger in the style of fin-de-siècle master Aubrey Beardsley.

One unanswered question of the exhibition is “What is Gay Art?” Art-historical scholarship since feminism has concentrated on determining if there is or has been a gendered iconography telegraphing sexual subject matter. “The Lavender Palette” does not take a stand, although some of the art qualifies as what is now seen as more courageous or openly resistant content in a heterosexually dominated midcentury society. Tobey shoved away his male figures by 1942 in favor of modernist abstraction inspired by his Baha’i religious faith, which was gay-tolerant. His criss-crossed “white writing” emerged from silhouettes of male crowd scenes. Acclaim in New York followed accordingly. Unlike Anderson, Graves (who had been his lover in the 1930s) also dropped male imagery in favor of the bird and other vulnerable creatures. They raised issues of environmental danger, but may have symbolized the oppressed male homosexual, or functioned as hidden self-portraits.

Seen through today’s lens, much art of the period on view could be considered Gay Art retrospectively, but much of it also is simply art made by gay people who were still for the most part still in the closet. This is how subcultures develop; and several are on discernible in “The Lavender Palette.” For example, a public high school art teacher, Orre Nobles, was the center of a closed circle of gay artists, dancers, poets, musicians, architects and others who gravitated to the charismatic figure’s Hood Canal retreat near the Olympic Peninsula. An analogy could have been made to Ogonquit, Maine, or Provincetown, Massachusetts, two earlier gay cultural enclaves contemporaneous with Nobles’ clique.

“The Lavender Palette: Excerpts” is a worthy beginning to an important undertaking: how pluralistic and diverse American art has been, and appreciating how long it has taken to amend omissions due to cultural prejudices and legal barriers.