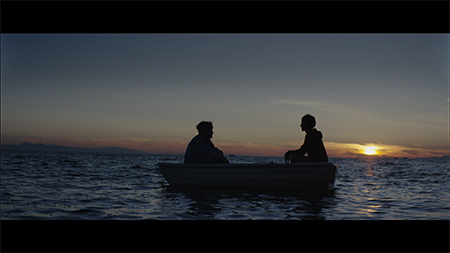 Joar Nango’s film, “Nomads Won’t Stand for Their Portraits,” starts everything with a dark, early morning landscape of Ulaanbaatar, Mongolia. In the opening shot, the foreground focuses attention on a nomadic Mongolian settlement punctuated by plumes of smoke. Bisecting the shot, a distant stream of traffic lights is preceded by skyscrapers and electric lines. It’s as though a ceiling of urban networks press down from above. Throughout the film’s presentation of houses, cars, dark streets and a storefront, the camera consistently rests on smokestacks, exhaling like wooly breaths. Still, the camera doesn’t venture indoors. “The Nomad dwelling is not attached to territory but rather journey,” says the single voice over, going on to describe the function of wool and goat hair as a traceless material that grounds its affiliated communities. The camera brings us indoors for the film’s final minutes, not inside a home but rather a station of labor, illustrating a source of steam and smoke. We follow a figure, obscured by light and shadow, pouring a canteen of water over wool to make felt. It transmits, through a continued material practice that is bound to cultural tradition, an intimate sense of place, regardless of geographic ownership.

“Mother and Sun, 1 Year,” by Carol Gahn, consists of crisscross stacked cedar logs. These run along two gallery walls and meet in a corner. One stack, just shy of six feet tall, indicates Grahn’s height. The second, around three feet, represents the height of Grahn’s one-year-old son. The piece is ongoing, and its heights change according to its subjects. This iteration of the piece is a collaboration between Gahn and Autumn Chacon. Gahn was invited to produce new work for the show and, in the manner of Sol LeWitt, created a set of instructions for a New Mexican artist to produce on-site. Unlike LeWitt, however, the individual fulfilling those instructions is acknowledged here as an active participant and collaborator. “For this installation, I asked to meet you, Autumn,” Gahn writes in a section of their correspondence presented to the left of the installation. The letters reflect on the commonality of motherhood, the dislocation and love it affords, alongside the repression of colonialism. “Unfortunately, our Nations are afflicted with violence and pain that bleeds from one generation to the next,” writes Chacon. “Maybe this is the drowning you described.” Like wool, wood can produce smoke, warmth, a sense of home. The effort and care of stacking is another labor that, in this context, corresponds to childrearing and family.

The final autobiographical video, “Rebel,” by Elle-Máijá Tailfeathers, presents a child’s reflection on her parents. Using animation, archival photography, and reenactment, the film captures the courtship and separation of Tailfeathers’s Sámi father and Blackfoot mother, who met at a global indigenous people’s conference in Australia. The story begins with a Sámi-speaking narrator, shifting to English when the narrator moves from Europe to the U.S. as a result of her mother’s enrollment in medical school. The marriage dissolves over time as the father figure is increasingly isolated and aimless, fixating on the O.J. Simpson trial and falling into depression. Capturing Tailfeathers’ movement between landscapes, “Rebel” illustrates how complex movement can be, how the most intimate spaces of family and romantic attachment are inflected by politics and cultural expectations that children subsequently witness and internalize.

Part of the exhibition’s title, dáidda gážada, loosely translates from the Sámi language: “to make questions with art as a medium.” This show does not draw facile conclusions but rather considers how connecting indigenous communities across oceans can be a productive and complex meditation in material, a labor art makes visible.