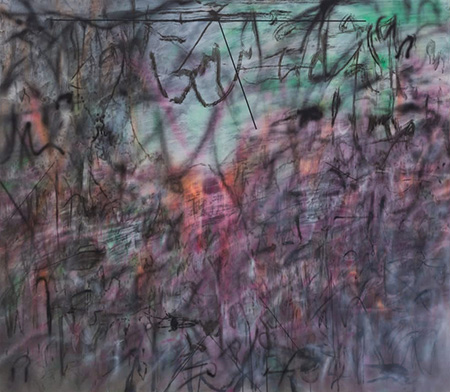 There is much to see and absorb in this mid-career survey of the art of Julie Mehretu, who has received considerable acclaim but continues to push boundaries. Mehretu’s best known works are monumental abstract paintings, many of them panoramic, that appear from afar to be colossal exercises in gestural mark making. Closer inspection, however, reveals the abstractions to be composed of layers and layers of drawing, printing, graphics, masking, digital collage, or painting based on numerous sources, such as maps, blueprints, photographic imagery, and an invented visual language that she calls “characters.” Typical Mehretu characters include dots, circles, crosses, arrows, and life forms such as bird wings and insects. Working systemically with her idiosyncratic language, Mehretu explores consequential topics drawn from history as well as current events. When investigating a particular subject, she builds composite compositions that refer to differing time periods by combining frontal, angular, and aerial perspectives that offer the eye multiple points of entry.

An Ethiopian-American who emigrated to the U.S. as a young girl, Mehretu has held a longstanding interest in issues of migration and flux. “Migration Direction Map,” for example, is an early diagrammatic drawing showing overlapping amoeba shapes interspersed with patterns of arrows moving in varying directions. In a section that includes this and other early works on paper from the late 1990s, we can observe how the artist developed and refined her process and personal language, setting the stage for her first large scale paintings, a 2001-02 trilogy of explosive works rendered in ink and acrylic with much of the raw canvas exposed. “Retopistics: A Renegade Excavation,” “Renegade Delirium,” and “Dispersion” examine how cities and civilizations transform through various cycles over time. How they rise and fall and reemerge is translated into powerful combustive energy constructed through layering an amalgam of images that includes architecture, maps, diagrams of airport terminals and transit systems, not to mention purely abstract geometric shapes. The riveting turbulence that emerges in “Retopistics” and “Renegade Delirium” is not only lodged inside the perimeters of the paintings. In these two works it appears to move at the speed of a cyclone about to hurl its contents at the viewer. In “Dispersion” the effect is more like the parting of the Red Sea, with the contents split in the middle and shifting laterally.

By the early 2000s, Mehretu had perfected and mastered her system so as to achieve a clarity of vision. Over the next decade, she moved from generic conceptualizations of how change occurs over time to more specific representations of the cumulative growth and entropy of a particular location or series of events. “Berliner Plätze,” one of the more somber and moving works in the exhibition, is a grand elegy to Germany (where Mehretu was then living) and also a critique of the Iraq War. Reminded of the Holocaust and the Cold War, the artist began the painting by layering several drawings of buildings destroyed by bombs in the Second World War. Next, she erased them, leaving a grid of glowing white lines that suggest the ghosts of structures from an earlier era.  “Mogamma (A Painting in Four Parts),” which was inspired by the 2011 Egyptian revolution, depicts an expansive topography spread across four vertical canvases that reflect the desert landscape, but also incorporates references to the diverse architectural styles of Tahrir Square and other sites that are similarly associated with political uprisings. As with many of the earlier works, colorful abstract lines and planes superimposed over an otherwise black and white composition refer to the dynamics of movement and change.

In contrast with the exhilarating vastness of the paintings for which Mehretu is best known, her current works feel more contained and confrontational. In addressing such topics as climate change and gun violence, Mehretu has turned to embedding drawn or photographic imagery within fields of emotionally loaded color. In “Hineni (E. 3:4),” which was conceived in response to California wildfires, politically motivated burning of homes for the purpose of ethnic cleansing in Myanmar, and the biblical burning bush, black abstract characters appear like embers scattering amidst a hot orange blaze. In “Conjured Parts (eye), Ferguson,” dismembered body parts and a blurred photo of a protester confronting police in riot gear are difficult to decipher, as they are buried within a murky array of abstract color blotches in pink, green, and fuchsia, ominously intermingled with blackish areas alluding to the smoke of gunfire. Less awe inspiring than her earlier works, Mehretu’s latest undertakings may leave us feeling uneasy. Yet, if they do just that, they have succeeded in conveying the urgency of our present moment of national and global upheaval.