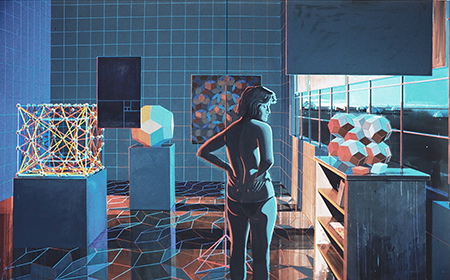 Geometric abstractionist Clark Richert is the subject of a double retrospective at museums in Denver and nearby Boulder. Both exhibitions are expansive and brim with explanatory material as they celebrate Richert’s contributions to the state’s art scene over five decades. He’s a veritable Renaissance man, familiar with architecture, math and physics, in addition to his art pedigree. In the 1960s he helped found the counterculture commune Drop City in southern Colorado, notable for its pastoral setting, experimental art-making, and multicolored geodesic domes in the style of Buckminster Fuller. In the 1970s and ‘80s, Richert was active in the art collectives Criss-Cross and the Armory, both of which continue to influence emerging artists in the state. Also underscoring his role as a mentor is his long career teaching in the metro Denver area.

The retrospectives convey the artists’ mind-bending yet intellectually bracing qualities as we wander through his brainy cosmos. A central focus is on Richert’s ability to produce incredibly precise and symmetrical pattern paintings that are steeped in astrophysics and a mix of other sciences. Rather than coming across as flat and repetitive, the paintings oscillate. Shapes seem to fold in on themselves and pop out from the surface. While MCA Denver’s “Clark Richert in hyperspace” is a fairly straightforward and didactic retrospective — arranged for the most part chronologically — the Boulder Museum of Contemporary Art’s “Clark Richert: Pattern and Dimensions” is more experiential. For instance, there’s a blacklight gallery for viewing Richert’s geometric abstractions in fluorescent paint. Plus, there’s a small upstairs room that invites hands-on interaction with plastic polygons and rods that create the kind of snap-together forms that fuel Richert’s ideas. Whether or not by curatorial intent, the two retrospectives succeed in complementing each other. MCA Denver helps viewers grasp the esoteric scientific principles underlying the work; while BMoCA offers a vibrant visual immersion.

Highlighting the show at MCA Denver is a room that brings together six large paintings from Richert’s “Late Pattern” phase, 2000 to present day. The color schemes and patterns vary, but all six are structured around the quasicrystal, a type of tessellation with multiple rhombuses. It’s sometimes referred to as “Penrose Tiling.” Wall text explains that, with the quasicrystalline pattern, Richert can turn a flat representation of an object into an image that evokes five dimensions. The most stunning of these patterned paintings is “Phi Tesserae” (2015), which stretches to 140 inches and becomes more captivating when viewed at various angles. Also mesmerizing is “Kepler Slant,” where a colorful field of pentagons interconnect to reveal stylized stars and flowers.

Further demonstrating Richert’s versatility is the Naturalism section, where the paintings incorporate human figures in the foreground while geometric and astrophysical objects surround them. It’s a metaphor of the mind at work in scientific endeavors. “True Story of the QuasiCrystal” (1989) shows a semi-nude woman in deep contemplation posed against a window in a room filled with polyhedrons and other scientific references.

Richert reminds us that he’s an art professor in the clever “Art Cube” (1995), where criss-crossing lines, color-coded squares, mini-copies of masterpieces and text provide a deconstruction of various art movements. “Argon” (1980) is an excellent example from Richert’s days with the Criss-Cross collective. The dense array of small gray and colored squares are arranged to evoke the structure of the periodic table, though the painting would be eye-catching with or without the scientific allusion.

A highlight of the BMoCA show is “The Ultimate Painting,” which Richert re-created in 2011 from a 1966 collaborative work at Drop City. It mimics a kaleidoscope, with a spinning image of a painted surface accompanied by a pulsating light.

Richert’s legacy is his crucial role in expanding the genre of geometric abstraction and exploring the tension between two and three dimensions in painting. The mathematical foundations can be daunting, yet the paintings possess such tremendous variety and vibrancy that they transcend any supposed gap between science and art.