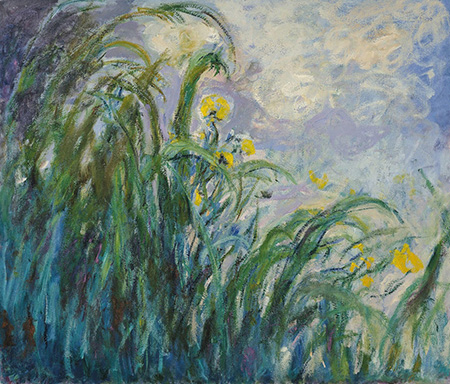 Why another Claude Monet exhibition? His audience has been saturated for decades. And why focus now on his artistic production in the last years of his life?  The answers to these questions are readily found in “Monet: The Late Years.” Encompassing over fifty paintings, its goal is to explore and solidify the importance of Monet’s bold innovations upon his return to painting in 1914 after a short absence following the deaths of his wife and son. The show also bookends the Kimbell’s previous “Monet: The Early Years” from 2016, coming full circle to reveal Monet’s drive and commitment to pushing the boundaries of the medium during his last years. In collaboration with the Fine Arts Museums of San Francisco, the Kimbell Art Museums’ deputy director George T. M. Shackelford, a renowned scholar of French 19th century painting, curated the exhibition.

For context, works that precede the body of work under investigation are presented. The show some fine examples from the 1890’s, a selection of water-lily paintings from 1904-7, and two views of his garden from a few years later. The major break with the past came with Monet’s ambition to work on a mural-sized scale, painting the water-lilies and his Japanese bridge in his Giverny garden. The inspiration and drive that informs the paintings in this show matches the “Nympheas” cycle of water lily paintings held by the Musee de L’Orangerie in Paris.

The Kimbell exhibition contends that the work on view “redefines Monet as one of he most original artists of the modern age.” This headline is hard to dispute when each painting, one after another, defies how we ordinarily think of Monet as the painter of drawing room scale easel paintings of landscapes. Take for instance “Water Lilies (Agapanthus)” from 1926, an immersive canvas measuring six feet tall and over thirteen feet long. This extremely modern composition anticipates the achievements of the New York School of the 1950s, with its grand scale and paint handling, of bold blues and greens, without the hint of a horizon line. The spatial flatness and disregard for perspective was radical at the time, and reconfigured Impressionism for the 20th century.

Another discovery in these final works was Monet’s response to the effects of cataracts as he aged, and how his altered perception of color and light affected his paintings. In two small works from 1924, both titled “The Artist’s House Seen from the Rose Garden,” an unprecedented range of wild colors characterize a new and quite contemporary departure. Both were begun out in the garden and then finished in the studio, where Monet was able to assemble visual phrases into a symphony of elements lifted from the garden. Both paintings would have been unthinkable a decade before. During the heyday of Impressionism a half century earlier they would probably have come under attack by fellow Impressionists as “unfinished,” a sobriquet used by the salon to denigrate their work at the time.

Also included in the exhibition are photographs from the period, some of Monet’s studies, and a series of silent films shot during the last years of his life. For enthusiasts who though they’d had their fill of Monet and Impressionism, this show will renew their excitement. It is as if you are seeing Monet for the first time.