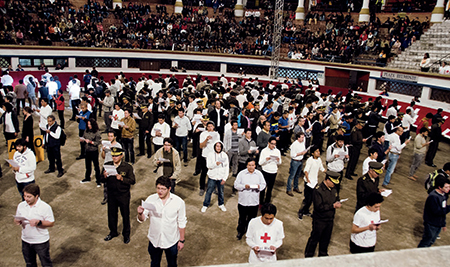 It’s dusk. In the theatre set, several cars are parked in a rooftop parking lot. At center stage, three black teens crowd into one of them, talking quietly. One stares directly at the audience, stating, “Your reality is a clothing or blanket that you put around yourself. To keep you warm. To keep your mindset. Once you take that blanket off, that cold air hits you. And that cold air is what our reality is.” One confesses to the others that because of what he looks like, he can’t get a job.

But wait. These aren’t actors. They’re real people. And this isn’t a set, either. And those aren't lines. They’re revelations of their reality. Given the intimate nature of what’s being shared, one wonders, “Can this be real?”

It’s all real. Artist Suzanne Lacy is the invisible maestro behind this magic — the theatre and drama of real life. Lacy deftly leverages the conventions of theatre, installation art and performance to present and re-frame social and political arenas in ways that provoke people to pay attention — and be moved.

Long before “reality” television, Lacy, a pioneer of social practice art, innovated a studio practice that involved orchestrating and broadcasting the untold stories of the drama, joy, pain, frustration and inequities of day-to-day life. For over four decades Lacy’s astute, ingenious interventions have magnified life’s most difficult topics: class, race, poverty, violence against women, ageism, gender inequality and cultural bias. In “Suzanne Lacy: We Are Here,” the expansive retrospective of her groundbreaking work shared by two institutions, it becomes evident that Lacy’s visionary talent emanates from her shapeshifting roles. She is artist, teacher, impresario, set designer, stage manager, PR agent, mediator and oracle. Tapping into wildly diverse mediums, her work blurs and often simply erases the lines between art, theater and activism.

She has accomplished this with precision and a prescient audience savvy that even Lin Manuel Miranda would envy. The work, political but anti-didactic, is experienced through the lenses of personal storytelling and collaborative exchanges of lived moments. Lacy stated, “Dialogue is my paint — and how it elicits emotional responses with the participants is my craft.”

Her ingenuity in designing austere, yet sumptuous, set pieces as backdrops for dialogue shines in the white palette of “Whisper, the Waves, the Wind” (1983-4), a collaboration with Sharon Allen. 154 white-haired women over the age of 65 convened on a pristine beach dotted with small white tables and chairs, all in white dresses and sun hats. The women intently discussed cultural visibility, dignity, respect, and reaching the outer edges of their lives while perched at the edge of the sea. Images of this work, observed from posts overlooking the beach, are breathtakingly beautiful.

With the meticulous attention to detail worthy of a UN-orchestrated summit, Lacy created “Dinner at Jane’s” (1993), a gathering of fourteen women activists and luminaries including Gloria Steinem, Anita Hill, and Dolores Huerta. The dinner occurred at Hull-House, Chicago’s first settlement house founded by Jane Addams — an activist/reformer who was the first American woman to win a Nobel Prize, in 1931. Over dinner, the women shared their visions for the future. Anita Hill observed, “We have to communicate the experience we share and how that can bring us together. It is necessary to write in order to heal … to share the pain with others.”

In 1987, Lacy joined the faculty at California College of the Arts. She began collaborating with photography faculty Chris Johnson, who recognized the subversive potential in teaching media literacy to Oakland high schoolers. That collaboration led to “Teenage Living Room” (1991-1992) and “The Roof Is on Fire” (1993-94), two works in the 10-year series known as “The Oakland Projects” (1991-2001). These installations present some of the most stirring moments in the dual exhibitions. In “The Roof Is on Fire,” Lacy staged a parking lot on the top of a downtown Oakland building where small sets of 2-3 teens gathered in the parked cars and simply began talking about their lives. As dusk approached, an audience was invited to stroll around the parking lot, peer into the cars, and eavesdrop on the conversations. Given the nature of the dialogue, it seemed in many instances as if the teen participants completely forgot there was an audience listening in.

“We Are Here” took three years to produce through a collaboration of the primary curators Rudolf Frieling (Curator of Media Arts, SFMOMA), Lucía Sanromán (Curator at Large, YBCA) and Dominic Willsdon (Director, Institute for Contemporary Art at Virginia Commonwealth University). It shows Lacy as an enabler of discovery, compassion and evolution through the powerful tool of sharing the personal stories of others. In “The Roof is on Fire,” one enlightened participant states, “Listening itself is a profound, revolutionary act. Just listen. Don’t talk.” Although “We Are Here” requires a lot of listening, careful attention, and commitment, it delivers provocative impressions and deep understandings that are unforgettable.