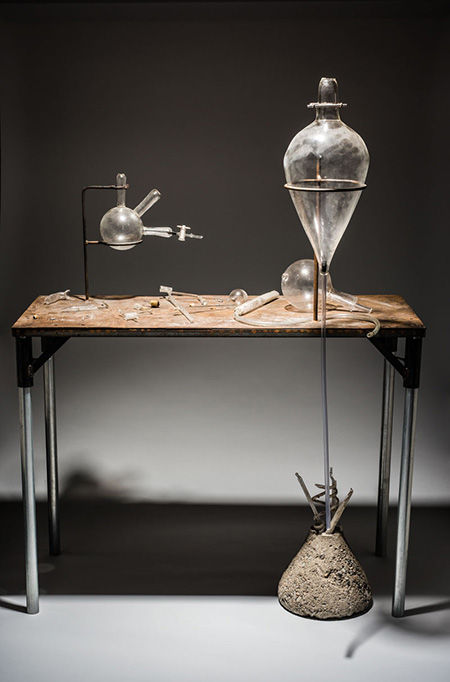 So overwhelming is the size of the gift Seattle philanthropists Rebecca and Jack Benaroya have made to Tacoma Art Museum that the inaugural exhibition in their new, eponymous wing, “Metaphor into Form: Art in the Age of the Pilchuck Glass School,” could be the first of five — or ten — more exhibitions to be drawn from the 353 paintings, prints, sculptures, photographs and, above all, glass art comprising the donation. Curator Rock Hushka’s task of interfacing 25 works from the permanent collection with ten selections from the promised trove was to sift through the logic of such diverse selections. It all revolves around the question raised by the title. What is “Art in the Age of the Pilchuck Glass School?” Yes, viewers will do well if they already know of the importance of Pilchuck, founded in 1971. Yes, if they understand the strong aspirations of the original glass-makers to be accepted as fine artists and not just craftspersons. And, yes, if they see how the Benaroyas (among other American couples) had their collecting habits turned upside down by the Pilchuck phenomenon, shifting their interests from clear Steuben crystal and Northwest School paintings to glass of all nations and historical periods, so long as the highest quality obtained. This shift formed the core of Jack Benaroya’s connoisseurship.

The current grouping, if anything, underplays the Benaroyas’ achievement in a partially successful attempt to place the gifts in the context of the American and European art world of the time, 1980-2000. To do this, Hushka drew upon non-glass artists already in the permanent collection or borrowed from collectors, dealers and other museums. To be sure, glass is given its due, but more avant-garde works using glass are favored to link them to New York and Europe where, in the former case, only white or clear glass was considered proper for years by stuffy museum curators and haughty collectors.

Pilchuck is all about color. Pilchuck artists who showed in New York such as Dale Chihuly, Howard Ben Tré, Daniel Clayman and Toots Zynsky, are included but distinguished from artists who live in New York and happened to work with glass, thanks to summer residencies at Pilchuck. Such proselytizing invitations (often underwritten by the Benaroyas) bore fruit in examples by Elias Hansen, Josiah McElheny, Joyce J. Scott and Kiki Smith. Hushka’s point, never fully spelled out, is that Pilchuck changed their lives and artistic practice. It became a lifeline for many of them, a breath of fresh air for the New Yorkers who found their way to Stanwood, Washington (where the school is) and drank the magic Kool-Aid of glassblowing.

Hushka does the collection and collectors further justice in the thick catalogue, with explanatory essays by New York curator Aruna D’Souza, Italian polymath Stefano Catalani, and Pilchuck historian Tina Oldknow. As in TAM’s 1991 attempt, “Glass: Material in the Service of Meaning,” the authors place glass as an aesthetic medium within contemporary art rather than the crafts. In the exhibition, though, we wander from an early Chihuly to other colorful and decorative works by Sonja Blomdahl, Dante Marioni and a dozen others, to darkened installations of glasses on shelves by Charles Le Dray, Mark Zirpel and McElheny. Somewhere in between, masters of Czech Constructivism — in glass — are highlighted along with works ignited by 1960s Pop Art by César, Erwin Eisch and Jeffry Mitchell. But why Daniel Carillo’s and Mary Van Cline’s photo-portraits of various artists are included is anybody’s guess.

All told, with two glistening new wings surrounding the original Antoine Predock building, the museum has positioned itself as the leading regional repository of Northwest art in all media. The more traditional art-historical holdings provide a basic introduction to the larger chunks of 20th- and 21st-century art visitors will see. Perhaps to compete with the nearby Museum of Glass, TAM has weighted its collection and future programming toward glass in the form of sculpture, decorative arts (two other gigantic glass collections are already here), and as assemblage-element, as is the case with East Coast glass. Once so forward-looking, American studio glass art now can be seen as looking to the past. Is the “Age of the Pilchuck Glass School” over?  One hopes and I believe not yet, for Tacoma’s sake. But the stars do seem to shine less brightly than they did when the Benaroyas drove up to visit the strange summer camp they’d heard about.