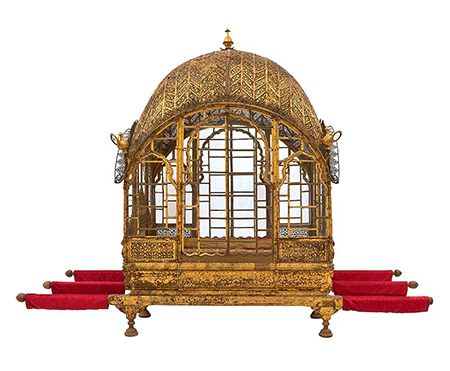 “Peacock in the Desert: The Royal Arts of Jodhpur, India” offers a glimpse inside the Mehrangarh Fort collection in Jodhpur and a wealth of masterpieces owned by the Rathore Dynasty, whose rule for centuries has encompassed the Marwar-Jodhpur area in the northwestern state of Rajasthan. The dynastic line has been in power there for more than 700 years. This exhibition covers about 400 of those years via some 250 objects that trace the culture’s history and artistic legacy. Many of these objects have never been seen outside the palace walls or the fort’s museum until now.

At the entrance to the exhibition, one is greeted by a massive elephant mannequin and two lifelike horses at the head of an Indian wedding procession. The elephant, painted and draped with richly brocaded fabrics, carries a howdah, a wooden throne-like seat for the bride and her bodyguard. The horses are likewise bedecked with jewelry, golden headdresses and bracelets circling their fetlocks. A slide show of scenes from Jodhpur is projected on a large screen behind them.

Museum Director Gary Tinterow has been working on the show for five years, but its origin dates back decades. Co-curator Mahrukh Tarapor, who is senior advisor for international initiatives at the Museum, and Tinterow studied with Stuart Cary Welch Jr., the Indian expert at Harvard University, and then worked together at the Metropolitan Museum of Art (2006-2010). In 1985, Tarapor curated an Indian show at the Met that made a lasting impression on Tinterow, and several years ago, he hired her to consult on a similar exhibition for the MFAH.

The entrance also includes a scale model of the Mehrangarh Fort, the “jewel of Jodhpur,” which is located 410 feet above the city of Jodhpur. Built around 1460, it is perhaps the best-preserved fort in Rajasthan. A winding road leads up to the fort, which is surrounded by thick walls and encloses a 26-acre compound of palaces, temples and gardens. Throughout the show are photomurals of the Mehrangarh Museum in Jodhpur and videos of interviews with members of the Rathore Dynasty. In the first gallery is an impressive 18th century palanquin, a covered litter constructed from gilded wood, glass and copper, designed for one passenger. It is essentially a large box carried on horizontal poles by four or six bearers. Palanquins were popular with ladies of the court but were also used by male royals on special occasions.

The walls throughout the galleries are hung with exquisite paintings and vitrines containing priceless objects such as an early 18th century diamond and gold turban ornament. Ceremonial regalia, impressively carved swords and other weapons, carpets, tapestries and furniture fill the rooms.

A central gallery recreates the zenana, a wing of the palace where men are not allowed. This room is dominated by a 17th-century Mughal tent of red velvet with gold silk embroidery, supported by gilded arches and enclosing an enormous carpet. A video of women whirling in colorful costumes is projected on the wall above a display that includes pillows, carved chests and other objects that would be seen in the zenana. Elsewhere in the gallery, a lavish 19th-century personal shrine holds a silver sculpture of Lord Krishna dressed in an elaborate gold dress. Dozens of portraits and intricate paintings offer a glimpse into courtly life. An opaque watercolor and gold painting on paper from 1827 depicts the Maharaja Man Singh playing polo with the ladies of the court, revealing that Indian ladies were not totally confined and participated in sports such as polo and hunting. Magnifying glasses are provided to examine the exquisite details of these miniatures.

The current custodian of Marwar-Jodhpur, H. H. Maharaja Gaj Singh II, established the Mehrangarh Museum Trust in 1972 to encourage tourism. He inherited his title at age 4 in 1952 when his father died in a plane crash. The show ends with his grandfather’s aluminum Rolls Royce and personal 1944 L-5 Sentinel aircraft. Throughout their reign, the Rathores have acquired and commissioned objects through trade, conquest and matrimonial alliances with many cultures. Situated on a main trade route, the clan took advantage of its location to acquire a vast collection of priceless works of art. “Peacock in the Desert” focuses on Jodhpur because the Rathore Dynasty has succeeded in keeping so much of its treasury intact. It helped, too, that co-curator Tarapor could facilitate the project as a Mehrangarh trustee.