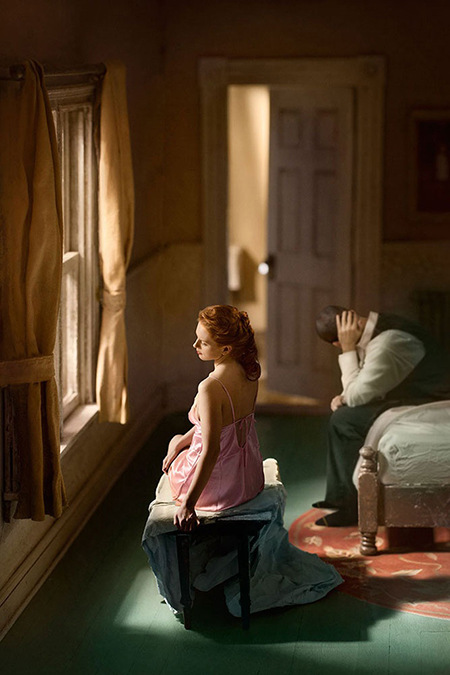 Exhibition dates vary (many have now ended), through April 22, 2018

In each of its iterations, the FotoFest Biennial has examined a different country and culture expressed by the rigorous vision of its photographic community. This year the exhibitions and activities surrounding the 17th biennial offering have been numerous and diverse, mirroring the country of focus — India, a dynamic nation of more than one billion people. Of the 100-plus participating spaces, four venues hoset as the official exhibition, presenting photographs and new media works by 47 leading or emerging Indian artists. The largest display of work was at Silver Street Studios, home of the FotoFest offices, but the nearby Winter Street Studios and the Silos at Sawyer Yards also had impressive exhibitions. Delhi-born lead curator Sunil Gupta worked closely with FotoFest Executive Director Steven Evans to realize the massive project and collaborate on the book “India/Contemporary Photographic and New Media Art.”

“As a large, multilingual subcontinent, India has always relied on images to maintain a cohesive whole across myriad subcultures, regions, castes and languages,” said Gupta. “This book addresses the legacy of the last 20 years, a period when photography and moving image media have been consistently included within critical exhibitions of fine art.” Among the issues raised in the photographs, installation pieces, videos, and documentary photographs are race and racism, gender and sexuality, caste and class, identity, activism, conflict, migration and the environment. Most of the 47 Indian artists live in India. A few reside in the U.K., and Prince Varughese Thomas lives in Houston.

Anusha Yadav presents photographs from her “Impersonations” series, in which she assumes the identity of other women, from her domestic helper to famous women like Indira Gandhi and Mata Hari. Indu Antony explores gender issues in a patriarchal society with dramatic and humorous portraits of drag kings (women dressed as men) impersonating cultural icons such as Michael Jackson, Jack Sparrow and Indiana Jones. Nandinni Valli Muthiah’s exquisite series “Definitive Reincarnate” captures the physical beauty of the God Vishnu and his avatar Krishna. Vicky Roy from Delhi offers a personal perspective on documentary photographs of young street children, having been a child runaway himself.

When FotoFest was launched in 1984, contemporary art galleries in Houston established relationships with photographers that continue today. This was Moody Gallery’s 14th show of Manual, the collaborative husband and wife team of Ed Hill and Suzanne Bloom. Couturier Gallery, the only Houston gallery dedicated solely to photography, usually shows Texas-based Keith Carter, and Hooks-Epstein Galleries features California artist Kathryn Dunlevie’s photo-collages. Anya Tish Gallery, on the other hand, introduced the work of Richard Tuschman, a New York artist who recently moved to Poland. His large painterly pieces, which are homages to Edward Hopper, were among the most popular of the gallery shows. Another noted exhibition was Misty Keasler’s startling photographs of haunted houses at David Shelton Gallery. Keasler traveled across the U.S. photographing the interiors of 13 commercial haunted houses, using long exposures and digital post-production to create the sometimes terrifying tableaux.

“Traveling the Road to Nowhere” by Houston photographer, activist, and oral historian Marti Corn at Samara Gallery focuses attention on the Lost Boys of Sudan, who fled their native country as boys in 1987 and have been living in permanent refugee camps in Kakuma on the western border of Kenya. Corn travels to Africa several times a year to work with the refugees, drawing attention to their plight through portraits and photographs. Corn also created a limited-edition boxed suite with photos printed on handmade paper toned and textured with organic materials collected from Kakuma. Another compelling exhibition is photographs of India’s Kumbh Mela by Greg Davis at Gspot gallery. He travelled there to photograph the world’s largest spiritual pilgrimage, during which millions of pilgrims gather at the confluence of India’s three holiest rivers. Davis also created an award-winning short film on his journey titled “Cloth Paper Dreams.”

Participation in FotoFest is citywide, with some 90 spaces across Houston hosting exhibitions. In addition, there are also more than 100 public events, including tours, symposiums, creative conversations, films, family events, a print auction, and portfolio reviews by national and international photography leaders. When 275,000 people from 34 countries converge on Houston every two years as they did this year, the city is transformed into an international center of photography.