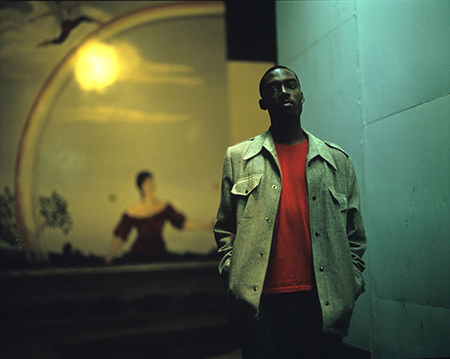 Since the 1990’s Doug Aitken has created compelling spatial, visually immersive video installations that have consistently expanded the expressive possibilities of new media and cinematic imagery.  In this survey, four large-scale moving image installations are accompanied with sculptures and photographs that present a faithful picture of Aitken’s art as it has developed over the last twenty years. The exhibition was organized by the Museum of Contemporary Art, Los Angeles, and curated by that museum’s director Philippe Vergne. In it’s incarnation at the Fort Worth Modern, the exhibition occupies the main galleries on the second floor, whose layout required preparators to negotiate the complex floor plan of the Tadao Ando building. The result is an installation that complements the art by compounding the immersive quality of the multiscreen projections as visitors pass seamlessly from one environment to another.

Visitors approaching the exhibition’s entrance begin to hear a faint rendition of the song “I Only Have Eyes for You,” and then they are confronted with a monumental video projection on a 360-degree aluminum and PVC screen, filled with people from all walks of life singing the song. This exquisite installation is both a mesmerizing work of art and an engineering feat.  The images occupy the outside of the circular screen and they are simultaneously projected on the inside as well; we find this out upon entering the enclosure and perhaps sit down on the museum floor to take it all in. Titled "SONG 1” (2012/2015), the piece sports a seven channel video unit with an eight-blended projection system for the circular screen. Most likely it’s a nod to the singalong sequence in P.T. Anderson’s film “Magnolia," the difference being that Aitken’s work always explores ideas without recourse to narrative structures, usually handling images as looped formulations. His work tends to resist closure because it’s hard to find a place in his looped video pieces where they could be said to begin or end.  In the case of "SONG 1," the piece plays on a continuous loop that would require 32 hours for a viewer to see it all.

In the titular piece "Electric Earth” (1999), Aitken creates a mazelike interior where four connected rooms screen images from eight channels of video. A frenetically paced series of video streams of a young black protagonist in an urban landscape populate this fast paced version of life after dark in the late nineties. The boy, who seems to absorb electric energy emanating from the lights and sounds of city life, wildly dances and shakes in trancelike parity with the music. With so many screens, walls, and openings, it’s impossible to ever see this as a whole. As always with Aitken, conventions about viewing, and ultimate expectations, are subverted by his intention to teach us how to experience a new terrain. This pair of strong works serve to anchor the show.

In "Migration (Empire)” (2008) Aitken again takes barren, rural, spaces into his lens. Three video screens, made to look like billboards on the side of a highway, display the interior of motel rooms. These were shot in the western part of the U.S. and represent development and expansion toward the Pacific. The videos consider what happens when animals from these regions such as a bison, cougar and beaver, are placed alone in rooms meant for traveling tourists — inverting the habitats so to speak. The surreal images bring to mind Luis Bunuel’s 1974 film "Phantom of Liberty”, which roughly begins with characters who dream of animals in their bedrooms, and ends with a confrontation between caged zoo animals and city policemen. Absurdity, irony and satire are equally present in Aitken’s world when the animals ultimately destroy the spaces that keep them captive.

Video art really took off in the 70’s, the first generation including key artists like Joan Jonas, Bruce Nauman and Nam Jun Paik. It can easily be argued on the basis of the work in this exhibition that Aitken is firmly established as a master of the second generation, quite a feat for an artist yet to reach fifty.