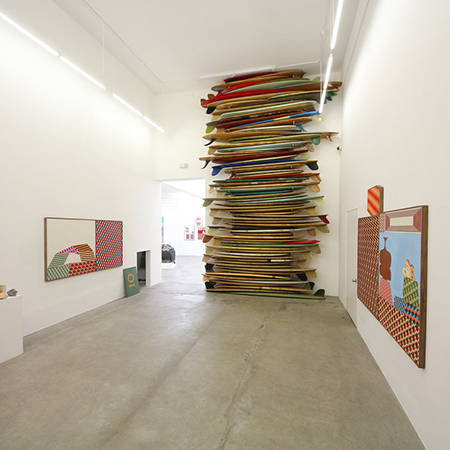 Spend time viewing Barry McGee’s newest work and you’ll likely have two reactions: This is insane! And, what’s going on? The latter especially is by design: no surprise there! As to the former, McGee has, once again, gone big and wild with color and pattern. The impact is manic, joyful, socially relevant, formally engaging, and endlessly fresh. There is so much going into and so many elements to many of the pieces, even after a lot of looking you’re bound to see something you’ve missed, or a juxtaposition of pattern and form that you hadn’t fully absorbed.

The show is pretty firmly divided into two categories. First, work McGee created (or assembled) — this takes over the first two galleries of this high-ceilinged space; some pieces pushing to the limits of that height. Second are works McGee gathered from friends, displayed in a third space accessed through a small opening (only a toddler could get through it without bending down) in the wall of the second gallery room.

The McGee originals, all untitled from this year, come in a variety of sizes, medium to huge. One piece covers almost the entire back wall of the main space. There are several flat wall pieces, and they comprise several smaller pieces abutting each other, at times creating irregularly shaped work, other times resulting in rectangles or squares.

He’s brought back some old favorites. There are many clear, flask-shaped glass liquor bottles with his iconic aging, downtrodden-looking male faces painted on them. The bottles evoke mass production. The men reference homelessness, which San Francisco is rife with; such people linger not far from the gallery’s Mission-based space. Many pieces push his tight, bright graphics to eye-dizzying limits. As has been his practice, the hand of the artist is present in tandem with the clear, straightforward hand-painted sign aesthetic.

McGee blurs the lines between art and life in several of the works, using found objects, sometimes painted on, sometimes left as is. Surfboards are stacked horizontally, floor to ceiling. A still-life-like display presents bottles, a small, old TV, clear, paint-splattered eye shields, vases and wooden busts. It possesses the casual if homey feel of a mantle display.

And then you go through the hole in the wall, to the show within the show. It’s all about McGee’s interest in community. The numerous works are made by friends, both well-known and largely unknown in the art world. It’s all hung in a hodgepodge, more in the manner of a thrift store than an exhibition space. This space had recently been taken over by the gallery (the timing with McGee’s show was sheer luck); tellingly, it previously was a check cashing store. The two storefront signs remain, but are changed to read “L.Quan, Check Cashing & Healing Arts Centre,” so that the space still looks like what it previously was from the outside.

We enter through the rear of the space, complete with working surveillance cameras, that takes us behind the counter, which features the customary counter-to-ceiling glass security pane behind which employees had recently serviced customers. Beyond is what had been the public area of the venue. And it is all jam packed with work by roughly 120 artists. There are photographs, paintings, drawings, sculptures, graffiti — art mayhem of the most delightful variety.

This enormous show is McGee at his finest, with the fortuitous timeliness of expanding into a raw space adding to the unique and grand scope of the show. This is a one of a kind event.