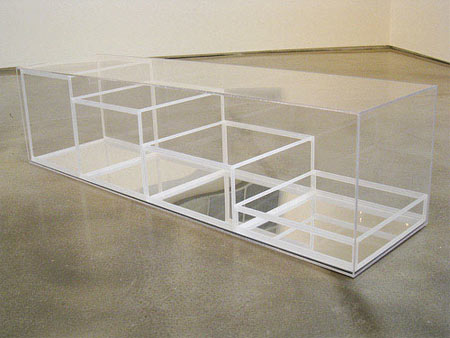 The first decade of this millennium may have been a letdown for many people, but for sculptor Theodora Varnay Jones, it has been a rich and productive one, judging by the eighteen works in this show and the forty-odd pieces in her almost-concurrent show (which ended a few weeks ago) at Don Soker Gallery in San Francisco. Varnay Jones, who is also an accomplished printmaker, makes small- to medium-sized works, most wall-hung, from tinted acrylic polymer stretched over wooden frameworks, kitelike. Other materials amplify their complex spatial geometries: fiberglass, Plexiglas, mirrored Plexiglas, fiberglass mesh, paper, pigments, graphite, colored pencil, gauze, paraffin, beeswax, rubber, and aluminum. Her mastery of materials and her unerring sense of shape, scale and placement make these syntheses – discernible is Constructivism, geometric abstraction, minimalist or serial art, postminimalism (geometry imbued with emotion) and perhaps even Op – some of the most intelligent, beautiful and poetic works around today. In an age of puerility and hype, these are small masterpieces of concision and refinement comparable to Joseph Cornell’s radiant “Dovecote” series, Josef Albers’ “Despite Straight Lines” suite of optical-illusion prints, Al Held’s interpenetrating geometry paintings of the 1970s, and, with their suffused radiance and contained emotion, Mark Rothko.

“Manifold,” the title of this small but beautifully selected and installed retrospective, is appropriately well chosen. An adjective meaning diverse, multifarious, multiple, plentiful; a noun designating a chamber or pipe fitting with many outlets; and a verb meaning to multiply or reproduce, “manifold” both describes Jones’ artwork, with its various implications and metaphors, and her meticulous yet intuitive/empirical working methods. It also restates, in matter-of-fact vocabulary, the current interest in both fusion and liminality (a twilight-zone or no-man’s-land between previously defined and binary states of being). Deciding whether this concern with blending and mixing derives from Hegel, Marx, or Andre Breton (remember the Surrealists’ enthusiasm for Lautréamont’s “umbrella and a sewing machine on a dissection table”), alchemy, or biology is of importance only to dueling scholars (although it is pleasant to imagine the progeny of those familiar inanimate objects). But part of the charm of liminality is to imagine its hybrid progeny. Magical metaphors do result from unfamiliar frames of reference.

In 1993, Varnay Jones wrote: “The meaning of observed physical and conceptual reality is constantly shifting and transforming. . . I want to symbolize the interaction of diverse components.” She wants to depict the process of change and the shifting of mental states, as the Futurists did, but instead of making convulsive oil paintings that engulf the viewer, she makes self-contained crystalline worlds that draw us in. As we move our eyes around them, into their planes and layers of real and simulated depth, variously clear, painted, gridded, dimpled, bumpy, honeycombed, laminated, coated or perforated, they change, visually and conceptually. David K. Roth (http://SquareCylinder.com), describes four pieces from the “Transparency” series as “wall-mounted wooden boxes with a semi-translucent gel that reveals, at varying levels of opacity, layers of geometric patterning that shimmer from below in a kind of iridescent haze that is impossible to fully penetrate or bring into focus. The surfaces are reflective, refractive and interior-lit, all at the same time. Acrylic polymer and fiberglass are what enable these dislocations; yet the pieces, no matter how hard you stare, remain perceptual mazes.”

While elusive, these pieces reward scrutiny and contemplation. “Transparency #37’’ resembles, with its arched frontal plane, a section of a an aircraft wing, or a sideways-mounted architectural model, but the wood-framed panels suggest windows or comics or filmstrip frames, and the “sprung” tension adds a note of physical urgency, if not Serra-school danger. “Transparency #33” suggests shoji screens, or casement windows with its flatter form and patterned or wire-reinforced panels, but the overlapping vertical mullions and horizontal transoms also suggest overexposed pairs or trios of Mondrian paintings, the black and the primary colors gone white.

In the more pictorial, two-dimensional “Indistinctions” series, Jones employs the grid as a framework and foil for the various mark-making procedures, or even rituals (incense-burning creates the scorched pinholes in “Diary”); these mock-scientific arrays or test strips are bound and obscured with straps of gridded fiberglass tape. They are implicitly Cartesian and analytical. Finally, several floor-mounted sculptures play with Sol Lewitt’s linear cubic Tetris structures and geometric progressions. “Ghost” is a set of four transparent boxes of ascending or descending heights, floored with mirrored Plexiglas, perhaps suggesting water (like the mercury rivers in the miniature world of The First Emperor’s tomb); the cube family members are set side by side within a snug vitrine.

“Transparency #27” resembles a chair reduced to cube outlines and painted black; atop the chair’s back perches a kind of headrest, or head, probably a recontextualized wall-mounted box piece; the chair rests atop two Plexiglas panels arranged in an ‘L’ shape, forming an implied vitrine, and bearing smoky, painted shadows of the chair. Lani Asher observes (at ArtPractical.com) that Varnay Jones’ work is suggestive of “alchemical apparatus or experiments that distill opposing materials into a powerful elixir. . . [or] philosopher’s stone, . . . supposedly capable of turning base metals into gold, and ... a source of immortality.” This is a kind of search for the self “through opposing principles of dark and light, spiritual and material, or celestial and chthonic.”  She quietly imbues materiality, despite the strictures of current art theory materialistic and phenomenological (just the facts, ma’am!), with soul.