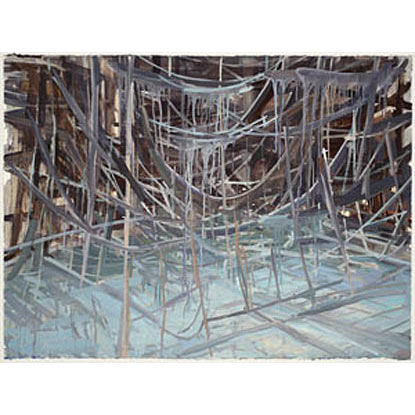 Northwest artist Margie Livingston has long been admired for her paintings of objects from the natural world. But in “Riff: New Paintings” she proves she’s a sculptor as well - albeit a sculptor of paint. Works on canvas are hung alongside three-dimensional objects built entirely from strips of dried pigment. Exhibiting her work suspended from the ceiling, splayed against the wall, or as egg-like forms held aloft on platforms, Livingston, who has often pondered how her models inform her works on canvas, now offers a compelling view into how the medium of paint can be used sculpturally.

Typically read as abstraction, Livingston’s paintings nevertheless directly translate location, line, gravity and light into thin bands of color that hang seemingly suspended in space. The artist’s painted canvases have traditionally built upon models that are so integral to her process that she has occasionally included them in exhibits of her work. In the past these models - perspective grids crafted of string and wood - have been inserted with cut branches and twigs. “But,” says Livingston, “once I took out the organic material the string itself became organic.”

For the majority of her current works on canvas Livingston relied on a soft, gently sloping string model suspended from a rolling six-foot cube in her studio, which she reproduced with hues dictated by the changing light. If “After Dark” shows crisp, neat bands of white sharply offset by a subdued background, “Daylight with Red Gel Small” combines vivid pinks, purples, blues and greens in a dizzying splash. But the biggest surprise comes in the resulting sculpture: “Large Drape” is a ghostly apparition executed in white acrylic paint, and a direct response to her paintings. This generates a visual call and response that is, in the most literal sense, elastic.

Flat forms glued directly to the wall, were reduced to a visual account of what the viewer could expect to see, as in “Twenty Four Grey Angles With Red Highlights and One Dot.” In spite of such detailed titles, which purportedly give away the “plot” of Livingston’s painting, the viewing experience held plenty of surprises.

To create her material Livingston poured acrylic paint onto a non-adhesive surface then peeled it off to use as a highly malleable medium, much like fabric. Thin strips of dried paint were wrapped into tight round pastel forms that, when cut open, reveal a multi-colored interior (“Green Blue to Pink”). Thick, flat strands are woven into loosely constructed cones (“Crocheted Painting, Small Beige”); sheets of dried paint are neatly folded over upon themselves (“Long Thin Folded Painting”); while a long, misshapen fragment is spooled over a nail in the wall (“Coiled Painting”).

Most painters are, abstractly speaking, sculptors of paint, building images through the careful application of layered pigments. But Livingston pushes this idea to an extreme in her construction of three-dimensional forms. The result is a body of work that might prod paint off the palette, but nevertheless keeps it as a medium very much in the limelight.