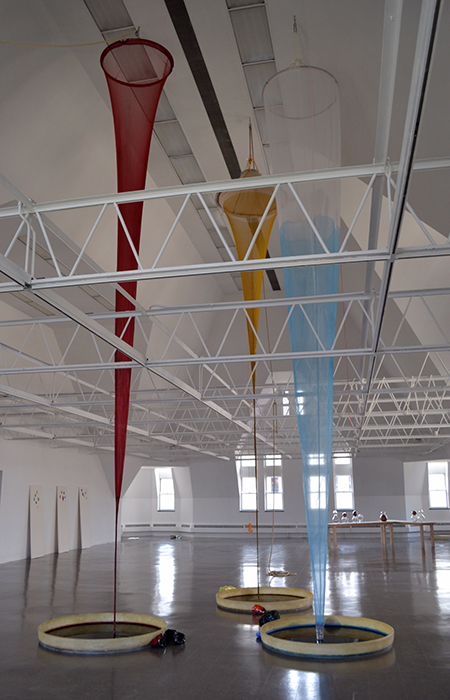 In the work of London-based artist Christina Mackie, the investigation of color is no theoretical venture. Hers is certainly in part an intellectual pursuit, but is more material than conceptual, experiential rather than formal. And while dialogues about color are typically dominated by painters, Mackie’s sculptures and installations provide a welcome point of view. Mackie herself gave up a painting practice, and here color is addressed not as the viscous skin of paint, but through properties inherent in the dyes and pigments at the core of coloration. Colors in this exhibition seep, stain, pool and encrust, in many cases letting nature proceed as an active force in the making of the work.

Dominating the room are what the artist informally refers to as “Filters,” a trio of nets hung from hoops suspended from the beams of the ceiling, the tails of the fabric tapering down into kiddie-pool-like containers filled to the brim with either red, yellow or blue dye. The nets, first dipped into the containers before being hoisted into the air, are soaked with color, while the surfaces of the vats of dye slowly crystallize over time. The pooling and verticality, the directional sinking and rising are also evident in Mackie’s “Chalks,” a series of tall white planks leaning along the walls. Each ceramic panel is pitted with a handful of shallow ovals in which puddles of watercolor were allowed to slowly dry up. As the water within the paint evaporated up into the air, the liquid level dropped, leaving behind concentric rings of pigment, denser and more saturated the shallower the puddles became.

Furthering Mackie’s procedure of distilling colors down to their base components are a collection of glass works displayed upon a wooden table. Slivers of bark and feathery onion skins are gathered into the tops of these bulbous, beaker-like containers using clear cellophane. These humble organic substances (which the artist explained were inspired by the collected materials that her mother used to make homemade dyes) suggest nature and alchemy, making these glass pieces illustrative of the science at the core of Mackie’s creative processes.

The artist states that, like a scientist, she sees her role as simply setting up a circumstance, a hypothesis, observing and recording the natural outcome. Her relinquishment of (at least partial) control is palpable in “Colour drop.” Mackie has a unique ability to minimize her work’s emphasis on her own artistic will, and instead underscore that of nature’s, with viewers walking away feeling not as though they’ve been in the presence of the artist and her perspective, but the physical presence of the matter and material by which she is stirred.

The Renaissance Society at The University of Chicago
LISTINGS