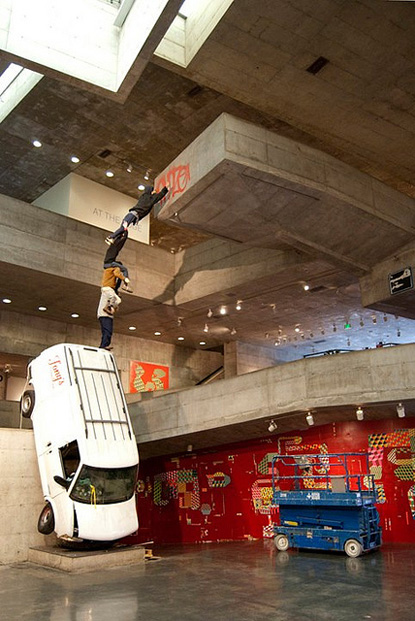 In this, Bay Area–based artist Barry McGee’s first midcareer retrospective, as with any successful retrospective, we are treated to viewing the full breadth of the artist’s output. And this show does this to the nth degree; from huge and highly detailed installations, to the smallest bits of artistic ephemera, to rarely shown works, this exhibition delivers, further providing context for and establishing why McGee is one of the most successful street artists of his time.

The exhibition, which is laid out chronologically, spans from 1989 to the present, mapping McGee’s emergence from graffiti art (which began in the 1980s) and art student (he graduated from the San Francisco Art Institute in 1991) to gallery artist. Immediately evident is McGee’s formal training in print- and sign-making and his interest in urban detritus, down-and-out characters, and, of course, street art and graffiti culture. Also evident are McGee’s various street alter-egos/tag names: Twist, Ray Fong, and Lydia Fong.

The work begins, and continues to be, mostly large. A major shift, however, is in color. Whereas early work tends toward the dark and rusty, newer pieces generally tend toward the colorful, becoming at times neon bright and graphically manic — a visual documentation, one might surmise, of moving from the hidden darkness of illicit street art to out-in-the-open, highly celebrated art star. Indeed, an overarching theme of this exhibition is the exposure and public display of the covert work of the street artist. Back to the earliest work, we see used spray paint cans as part of an installation: the artist as an elusive character. Moving into the large and open floor plan of the museum’s main floor, where the most current work is shown, we find a number of mechanized full-sized mannequins, dressed in dark hoodies and dark pants, “spray painting” the walls: this underground world comes into the light. We see in full view how the street artist works — climbing on trash cans, balanced on cohorts' shoulders, hiding in bushes, and even (in a slightly less “real” facsimile) perched on an upended (real) van.

McGee further intertwines the indoor world of the gallery/museum with the outdoor world of street art, creating a delightful hybrid art, the beginnings of which stretch back to his earliest works. Most of McGee’s large wall pieces are comprised of numerous smaller works, be they panels or individually framed. These are then fit together to create enormous pieces — a melding of a gallery exhibition hung salon-style (echoing a scene that McGee encountered in the early 1990s in a church in Brazil where hundreds of framed images hung crowded on a wall) and graffiti wall murals.

Certainly, two main installations that stand out for their grand size and complexity. First there is the life-sized bodega of “Ray and Lydia Fong” — filled with and surrounded band innumerable but conscientiously arranged inventory of surfboards, books, broken furniture, framed artwork, and hand-painted signs. Then there is the column of TVs, created with Josh Lazcano, each of which is playing a different video. Their content ranges from artwork to documenting street artists at work, and more. These works point to additional commonalties found in McGee’s work, further reflecting and bringing in his urban and graffiti background: collaboration and inclusiveness, not only of people but also of objects: McGee pointedly doesn’t leave anything or anyone out.

While these works are indeed magnificent and stunningly ambitious, there are also some not-to-be-missed smaller gems and lesser-known works. The beautiful etchings show McGee’s mastery of line. Collections of the aforementioned and abundant ephemera contribute to a better understanding and appreciation of McGee’s range and influence.

Taken together — and that’s saying a lot because there’s a lot to take in here — this is a masterful display of a hugely prolific and deeply thoughtful talent. What’s more, it’s a hell of a lot of fun.