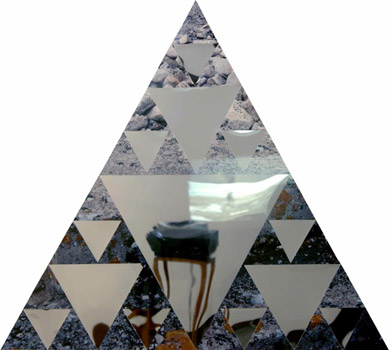 The first of a series of ten curatorial projects, "100/10 (100 spaces/10 visions)" begins with the work of Los Angeles based multi-media artist Anna Ayeroff curated by Alex Harvey. Culling images from a treasure trove of her family's history, Ayeroff creates a slideshow documenting her great grandfather's immigration to a farm colony in Central Utah called Clarion. Founded by a group of Socialist Jews, Clarion was seen as a Utopia separated from the city, free of the indecency of the Jewish ghetto and a site to raise children, harvest food, and live harmoniously. Failure was not an option for the founders of Clarion, and while their soil was barren and only one season of crops survived, after seven years the colony was a site of dreams.  Ayeroff followed in her great grandfather's footsteps and started to consider her own Utopia, which is by definition a place and non-place. Video footage of her road trip to Clarion in 2008 shot in Super 8 film plays simultaneously with the slideshow.

In this footage, the Clarion Ayeroff encounters is an abandoned piece of land in the middle of nowhere with little to suggest that anyone ever settled there. "If I could live here, I would" is a sewn Mylar sculpture situated in the upper corner of the gallery. Created in a rock formation the form is based on the Cosmic Dust Particle, a perfect form for Ayeroff. Along the wall are three large-scale color C-prints that have been cut and infused with meticulous Mylar shapes. The photographs are of a bare stone platform in Clarion seen in the Super 8 video that Ayeroff had ascended upon with a flag. Photographed in an exacting manner, employing the fractal particle formula, three perspectives of the platform in varying angles are presented. Each C-print is cut according to the Mylar shapes inserted within the picture - a rectangle, a square, and a triangle. Nathan Ayeroff is cited in the slide as indicating that "Clarion was an impossible dream," and while the soil may not have been fruitful and the colony has long since ceased to exist, it still provides fertile aesthetic ground.