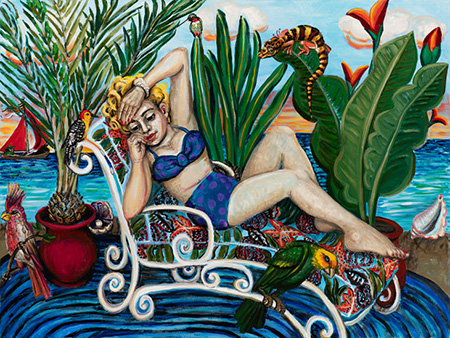 For decades, Gregory Grenon and Mary Josephson were one of the Portland art scene’s bona fide power couples, socially ubiquitous, well reviewed, widely collected, and prestigiously represented. To outward appearances, their painterly styles were similar: a brand of eccentric figuration that seemed more cosmopolitan than regionalist. Josephson’s tableaux portray a diverse coterie of far-flung friends. Grenon’s female figures exude a New York/New Wave trashed-out heroin-chic debauchery that led many to misconstrue his sensibility as misogynistic. In point of fact, as Josephson and gallery owner Martha Lee attest, nothing could have been farther from the case. Grenon was a lifelong student and troubadour of the feminine mystique. According to Lee, the ruddy-cheeked lasses he portrayed, with their dark, under-eye circles and nauseated complexions in hues of Toulouse-Lautrec chartreuse, owed more to his orientation as an unabashed colorist than to any preoccupation with narcotized demimondaines. But who’s to say why a figurative painter returns to a given archetype — Giacometti’s stick figures, Modigliani’s oval-faced ciphers, Caravaggio’s enfants terribles?

Except for a smattering of commissions, Grenon’s figures were not actual sitters, so these are more psychological portraits than literal. They found their audience in the Northwest and beyond; they had their moment in the hard-partying “Old Portland” of Gus van Sant, Walt Curtis, and Tom Cramer. In the aftermath of Grenon’s death earlier this year, the faces stare out at us implacably, each one executed in his signature style of oils reverse-painted on glass, often presented in found frames or framing devices, as in “Climactic Scenes” (1999), in which nine female figures hold forth in a multi-paned found door frame, the bottom six panes filled with an assemblage of dominos, pencils, action figures, playing cards, a Mardi Gras mask, and other bric-a-brac. The show’s curation, a mini-retrospective with work from 1987 to 2016, makes clear the artist’s obsession with the female semblance, the only exceptions being his depictions of baseball players (he was a lifelong aficionado), as in “Mordecai (Three Finger) Brown” (2011).

Joined at the hip as they were in the art-scenester consciousness, Grenon and Josephson were fully formed as artists when they met, and despite their shared emphasis on figuration, their thematic concerns diverged. The Josephson paintings here are all new, and they reflect recent fascinations. Last autumn, the couple had traveled to Umbria, Italy, where Josephson became fascinated with historical depictions of religious and mythological subjects, which appear in the current body of work. She pays homage to Botticelli’s “Birth of Venus” and Caravaggio’s “Bacchus” and “Medusa,” as well as a menagerie of lions, satyrs, and griffins.

In counterpoint to these faraway and long-ago creatures, a second body of work attends to matters closer to home — in fact, the very idea of home in a Portland in which homelessness has become an overwhelming mental-health and public-health scourge. As if in antidote, the artist gives us scenes of domestic contentment: an affectionate portrait of her daughter, “Aurora,” and a series of sensual figures reclining in verdant backyards under the rubric “Portrait of Home.” Her range of media is impressive, extending beyond the oil paintings that are the source of her primary renown and encompassing glass mosaics such as “The Red Fan” (2014-2022), a trio of whimsical embroidered works on felt, and glazed paintings on ceramic tile.

This is a bright, vividly chromatic, cheerful, even sexy show on its face, but the backstory casts a poignant shadow. To exhibit alongside one’s late husband, who died only seven months before, must be incredibly difficult and bittersweet. For Josephson, this has surely required a large measure of chutzpah and courage. For the rest of us in the Portland arts community, it is a chance to remember a seminal figure in our milieu while celebrating another important figure who lives on. Like the mythological creatures in Josephson’s paintings, the legends we revere in our own more recent and local history do not stand still; they morph along with our changing perceptions and mores. It serves as a reminder that eventually, inevitably all contemporary artists become historical artists. “Saints and Monsters, Monsters and Saints” is a séance of sorts, a conversation between the living and the dead, to which we stand privy.