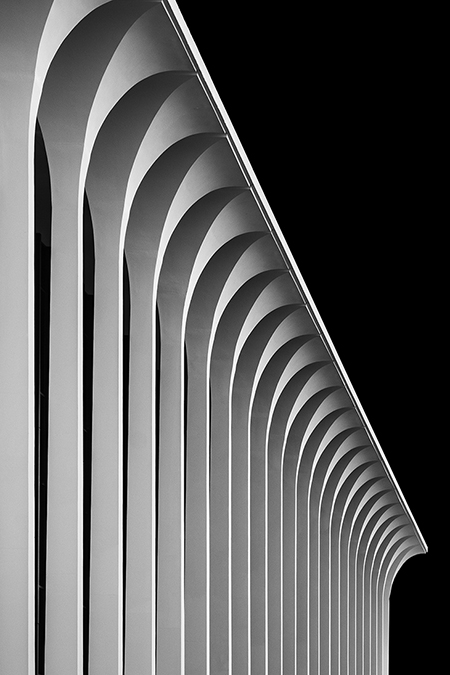 Two dozen black and white photographs — all portraying the pared down exteriors of Southern California buildings — are expressions of Jacques Garnier’s passion for architecture, art history and poetry.

While the photos on exhibit at Laguna Art Museum evoke modern art movements including Minimalism and Hard-edge, they also reflect Garnier’s active engagement with verse. Marie Stone writes in the exhibition catalog, “There are photographers who hone their skills like poets, evoking emotion through absence, provoking an audience’s curiosity with what isn’t shown, and stirring something subconscious in the imagination.” She adds that his work “incorporates many principles found in poetry — repetition, ambiguity, negative space, and abstraction.” Garnier, who is also a published poet, explains, “Poetry is often about ambiguity, about what I leave out. With this series, I leave out all details, all distractions except for basic structures” [of the buildings].

By approaching his deconstructed images with skillful use of light and dark, much of the contrast achieved with Photoshop, his photos bridge reductivism with the form-follows-function aspects of modern architecture.

Garnier’s images of buildings, from the mundane to the renowned, further evoke the work of 20th century photographers such as Paul Strand, as well as abstract painting. But they go further. With his compassionate and formalistic eye, he elevates reductive images to heightened visual harmony, grace, even to meditative states. An interview with Garnier revealed that when he began working on this series, shortly before the start of the pandemic, his desire was to de-clutter his photos and to focus on angles and views of structures that most people don’t normally pay attention to.

He researched buildings throughout the Southland on Google Earth, visited them, observed their exteriors from various angles, and envisioned them set against negative black backgrounds with all streets, cars, people and foliage removed, by using contemporary digital tools. He explained in the catalog, “The negative space of these deconstructed images is the pause between the notes of the music, a disruption, to make you create your own interpretation and to enjoy the silence. This emptiness allows for potential.”

“The Veil and the Vault” (2020) illustrates a side wall of The Broad Museum in Los Angeles. Eschewing the museum’s well-known facade, the photographer concentrates on a small portion of the exterior’s veil-like design. Set against a black Photoshopped background, the image reveals unusual details involved in planning and constructing the building’s outer surface, bringing to life an aspect of museum that few people take time to see.

“Ascension” (2020) focuses our attention on a portion of the nearby Walt Disney Concert Hall. The detail reveals an angled peak — soaring into the stark black sky — that most of us probably do not notice. Yet Garnier, with his poetic eye, has stripped away familiar aspects of the concert hall to concentrate on this one elegant feature.

The contrasting “Infinitum” (2020) selects the diminishing size and powerful rhythm of a series of armed doorways at York Hall at UC San Diego. The image elevates the seemingly dull drone of the doorways to a spiritually uplifting ambiance.

The intriguing “Shul” (2020), an exterior wall of Sinai Temple in Los Angeles features a design that appears Islamic in origin — at least as the camera captures it. As Douglas McCulloh writes in the catalog, “These photographs dwell in the zone between report and fabrication.”

Garnier’s inimitable perspective on many other buildings — including a Los Angeles police building, a side view of the Segerstrom Center for the Arts in Costa Mesa, an angled shot of the Taj Mahal Medical Center in Laguna Hills, and an upward-looking image of the Wilshire Grand Tower in downtown Los Angeles — reduces them to their basic designs in order to enrich them with felt response. He further defines them by situating them against stark, black backgrounds. They express the vision of a photographer who is striving to create a new paradigm for how we respond to architecture.