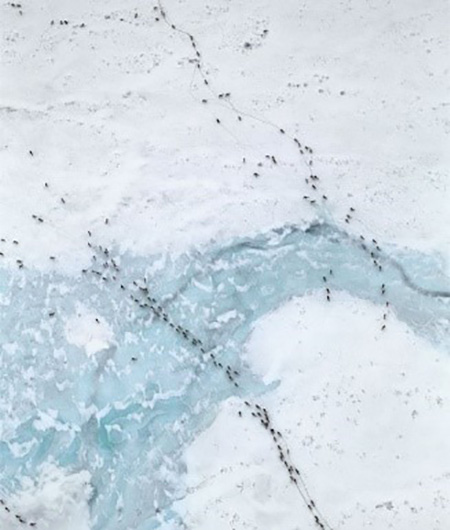 Whether purchasing anything wrapped in plastic, taking a flight, building a petrochemical plant, or drilling in an Arctic Refuge, it’s hard to connect seemingly discrete actions in one part of the world to hurricanes, displacement, drought or extinctions in another. Environmental activist and photographer Subhankar Banerjee (b. India, 1967) makes one such connection visible, organizing different low-precipitation landscapes into a singular exhibition. “Long Environmentalism” excerpts two bodies of work about Alaska and New Mexico to show them at parallel tipping points.

The first series includes large, birds-eye Alaskan landscape photographs with lush and complex patterns of clouds, sediment, caribou, ice, tundra, waterways and birds. They call attention to the intense activity and migration these lands support. Wall text describes affiliated anecdotes, including government efforts to increase drilling and the reciprocal resistance of local indigenous tribes; how increased drilling further challenges animal populations that rely on the same territory; and the impact of changing weather patterns. The second body of work depicts photographs of dead or dying piñon trees in more suburban New Mexico settings. These works are decidedly less fantastic but usefully so, calling forth our strange and collective capacity to witness extinction (much less relate to an individual tree). The installation of these photos verges on awkward, sometimes composed by multiple panels, and occasionally hung at odd angles.

In wall didactics, Banerjee attributes the exhibition’s title to a member of the Gwich’in First Nations tribe who grew up in the wilderness before being relocated by government conservation efforts in 1960. “I came to realize that long environmentalism as practiced by people like [Sarah] James sustains itself over a long period of time, and is able to accommodate multiple perspectives, in large part through the act of sincere listening …” Alaska and New Mexico suffered related impacts from the mid-19th century ethos of Manifest Destiny. An expanding America regarded this “wilderness,” previously uninhabited by Europeans, as available for unlimited extraction — a mentality that evolved today’s climate crisis and shaped conceptions of the west. Banerjee lends visual credence to this historical connection.