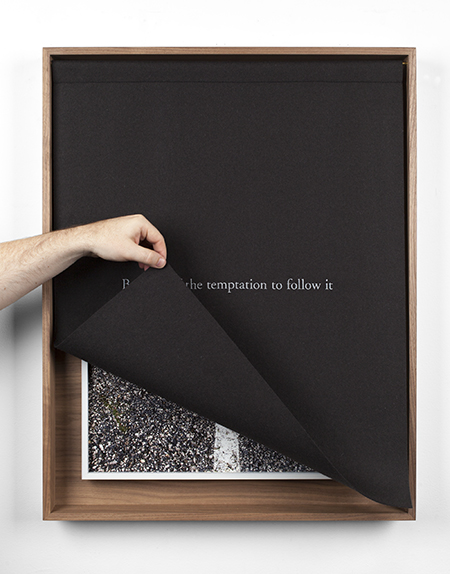 Conceptual art has its austere, intellectual side, but it is tempered by some artists who explore the perplexities of life rather than proclaiming the true faith of procrustean theories: call it conceptualism with a human face. For forty years, Sophie Calle has examined personal relationships, time and memory in a practice that uses photography — along with installations and publications — but is not strictly visual or photographic in its effects or affects (which include humor and irony).

The current show comes three years after her Fort Mason show, “Missing,” which featured four bodies of work from 2007 to 2011. The seventeen works in “Because” are modestly-sized black-and-white or color photographs of objects, places and people, with the framed images obscured by black, red and blue woolen felt curtains meant to be lifted — with two hands, as the gallery requests. (Art history mavens will remember cathedral triptychs that were opened only for rituals, and Courbet’s notorious curtained painting, “The Origin of the World.”)

Laser-embroidered on the curtains are poetic musings that have the effect of voice-overs in movies. Each text begins with ‘Because.’ “Mother-Father,” a depiction of two tombstones, is modified by a mordant “Because revenge is a dish best served cold.” “The Armchair” is anthropomorphically and elegiacally inscribed, “Because it was his / Because it’s looking at me.” A street sign reading “Plurien” acquires the editorial comment, “Because what else after nothing more?” The images and texts fuse indissolubly into a visual/verbal hybrid object that can never be perceived in its totality, remaining obdurately half-hidden except in our memory.