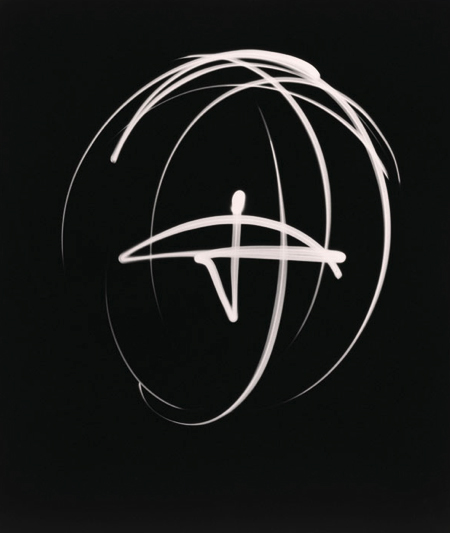 The camera’s capacity to produce images beyond what the eye exactly sees is now universally avowed to the point of being taken for granted. Fine art photographers during the mid- to late-2Oth century, before the primacy of digital cameras, labored earnestly to integrate the non-representational visual vocabulary of abstraction into their work. “Beyond the World We Know” presents 16 such artists, who successfully expanded photography beyond its discursive documentary idiom into the more subjective and poetic realms of abstraction, symbolization and self-expression. The exhibition offers an all-star cast of mid-century modernist masters, including Minor White, Barbara Morgan, Frederick Sommer, Arthur Siegel, Aaron Siskind, Brett and Edward Weston, Walter Chappell and Edmund Teske.

A chiaroscuro-laden, geometric and/or organic driven energy aligns itself, pulses and swirls in many of these (mostly) black and white works. Several, such as Morgan’s 1940 light drawing, titled “Samadhi,” eschews recording real world objects as their subject matter altogether. Rather hers and other’s in the show use then new equipment such as enlargers, and experimental darkroom manipulation techniques such as duotone and solarization to make explosive and lyrical gestural marks of light that stand alone as finished works of art. The experimental cropping and novel tight close-up framing of his subject’s details (graffiti markings and the peeling paper of an old poster) in Aaron Siskin’s “Chicago 22” deliberately evoke an association with the paintings of the photographer’s Abstract Expressionist peers and friends, who included Franz Kline and Mark Rothko. Small, historic and highly informative, this tastefully displayed exhibition offers a close-up look into a pivotal development in 20th century photography.