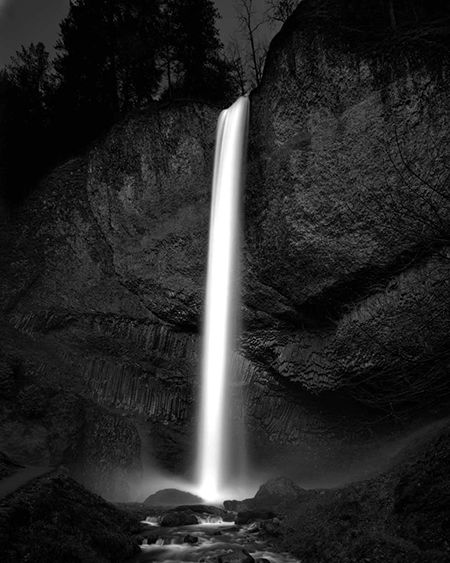 Ansel Adams’ zone system, with its ten gradations from black to white. dominated photographic aesthetics for decades. But not everyone adopted the idea that the whole spectrum needed to be used, as a pangrammatic sentence employs all the letters of the alphabet. Photographers of nocturnes, a good example being the jazz musician photos of Roy DeCarava, prefer the darker end of the tone palette. So does the Bay Area photographer Adam Katseff in his dark landscapes.

In “Waterfalls,” five large prints from his “Rivers and Falls” series, the photographer presents, in living black and gray, time exposures of cataracts, blurred by motion, and framed by shadowy cliffs; the scenes are thus deprived of specificity and generalized into enigmas. Katseff’s pictorialist approach, far from the immediacy and sharp focus championed by Adams and his f/64 cohort, is introspective and poetic, although the locations he shoots may already be familiar to photo fanciers from earlier works by Adams, Carleton Watkins, and other documentarians and mythmakers of the American West. Katseff’s ghostly waterfalls, diffuse and frozen, like liquid smoke (not the barbecue sauce) become metaphors for infinity, or maybe the elusiveness of reality. So do his opposite-but-equal, featureless studies of specific interiors, white and pale gray, taken from scale models made of pristine foam core. Says Katseff, “The outline of the image is easy to see, and as with memory, our imagination must supply the rest.”