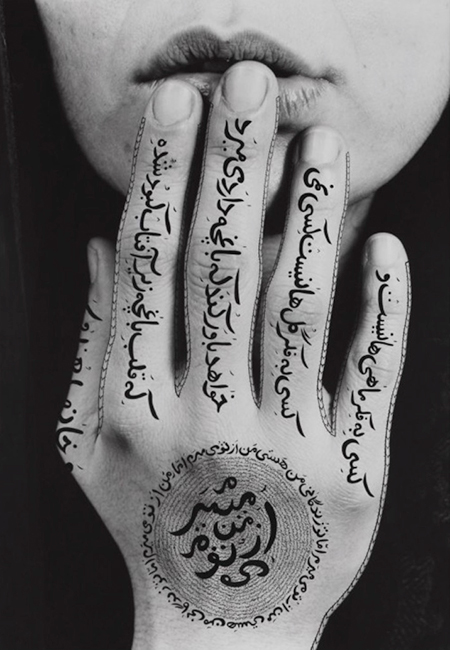 For nearly three decades Iranian-American multi-media artist Shirin Neshat has enraptured audiences with her searing humanism, conveyed through a deft engagement of both still and moving camera. Neshat has re-inscribed the metaphysical vision of Farsi poets, both historical and modern, on the body, literally as well as figuratively. I say "re-inscribed" because the people Neshat photographs have had their words or the words of others written on their images — faces and hands, for the most part — so that their skin speaks for them even when their mouths cannot. It’s a conceit that befits Persia's immersive poetic tradition.

With its extensive annotation “I Will Greet the Sun Again,” surveying 25 years of Neshat’s work, valorizes what otherwise might seem simply a recurring stylistic quirk to non-Farsi speakers. It quickly becomes apparent that, however she may exploit the calligraphic allure of Arabic writing, Neshat is first and foremost concerned with the lives and souls of her subjects, political or not. Her most recent work documents residents of small New Mexico towns. The series clarifies her intentions by showing us the pathos of people with whom we share a common language but who are otherwise as strange to us as the Iranians and Azeris comprising the other aggregate accounts. The most inescapably moving works are her moving pictures, film installations that provide the ritualized rudiments of dreamlike stories, choreographing clusters of people — worshipers, wanderers, inhabitants of ancient cities and even more ancient landscapes — into wordless but soundful, and breathtakingly beautiful, sequences. These screenworks are mesmerizing; be prepared to sit through some of them several times.