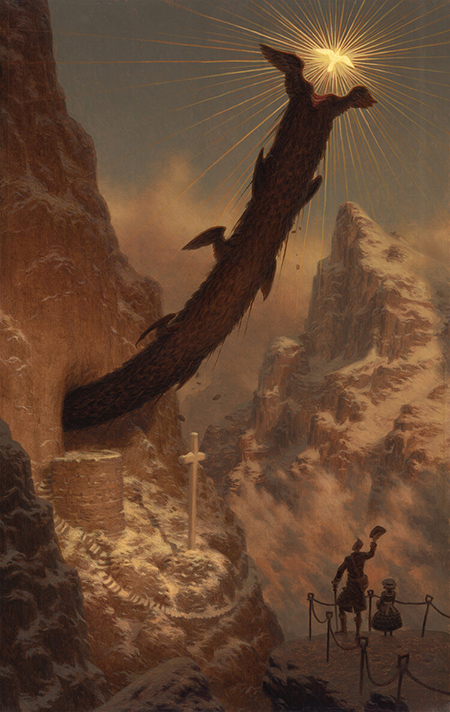 If there is a single world being explored in the fantastical paintings of Peter Ferguson, what an expansive lore it must have. Judging by settings and clothing, it’s a parallel universe to early 20th century Europe. His earthy palette has the look of early photography and neglected paintings. This calls up feelings of nostalgia that makes them seem familiar, and the narrative content more charming, despite gruesome details.

Ferguson’s previous shows have been haunted by the specter of war or menageries of strange creatures, but the works included in “Skip Forward When Held” feel more religious. They continue the morally ambivalent tone, in which anything could be villain or hero. Even monstrous non-humans are accorded dignity. But what to make of a work like “The Grotto at St. Michel,” where an enormous worm rises skyward from the eponymous cave with a radiant dove at its mouth? In the foreground, a man doffs his cap from a roped observation deck. No metaphor will save us now.

This de-familiarization of Christian iconography reminds us how strange those religious stories really are. Nor are Ferguson’s sources exclusively western. Hairy, floating “Hungries” bring home the preta, or hungry ghosts of eastern lore, to raid kitchens rather than torment souls. The huge disembodied heads emerging from a chimney in “Stroke of Midnight” are up to no good, and elsewhere a “Hairy Devil” with arms full of severed human limbs may be getting his comeuppance, swarmed by a nest of ghosts. You are free to complete your own story.

This is good practice for a skeptical regard of religious and political propaganda, while demanding more than moral relativism, the harshest critics of which can be the most hypocritical and corrupt. As we ponder globally the twilight of species and open societies, it’s important to reflect that other worlds are still possible. Ferguson’s narratives help us do that without resorting to mere escapism.