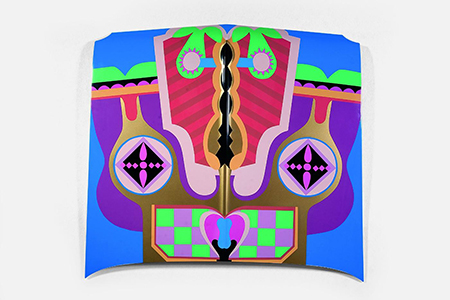 Judy Chicago is best known for her ambitious and celebrated monument to women, “The Dinner Party” (1979, Collection of the Brooklyn Museum). The seeds of that undertaking and much more are to be found in works created in Southern California from 1965-1973. As revealed in this comprehensive exhibition of her art from that period, Chicago was already operating at the cutting edge of both second wave feminism and contemporary art by that time. Her goal from the very start was to find a place for a female viewpoint within the male-dominated contemporary art scene. Towards that end, she strategically introduced a feminine sensibility into genres mostly practiced by male artists. One upshot, post-graduate school, was to enroll in classes to learn techniques such as fiberglass casting, pyrotechnics, and auto body spray painting. As a woman swimming in a sea of men, Chicago’s involvement was largely overlooked at the time, yet such skills took her to the forefront of developments in Minimalism and Finish Fetish.

In her Minimalist sculptures, Chicago challenged the austerity of the New York brand by painting simple geometric structures in bright pastel colors found in domestic settings, such as pink, turquoise, orange, and lavender. In “Rainbow Pickett” and “Rearrangeable Rainbow Blocks,” modular units of differing colors are assembled together to produce a rainbow effect. Considering that Minimal art was supposed to be about nothing other than the object, Chicago’s preference for playfulness and emotion ran counter to the aims of orthodox Minimalism. It is thus unsurprising that the joyful and animated “Rainbow Pickett” was not particularly well received when exhibited in the movement-defining “Primary Structures” exhibition at New York’s Jewish Museum. In hindsight, “Rearrangeable Rainbow Blocks” can be considered precursory to today’s ubiquitous immersive installations, as it may be set up in any configuration and we engage with it by moving through it.

If any singular project provides an early hint of the definitive direction Chicago would soon take, it is her 1965 series of automobile hoods, spray painted with colorful patterns that prefigure the “Pattern and Decoration” movement of the 1970s. In “Birth Hood,” the patterning includes an abstraction of a uterus, foreshadowing the vaginal motifs of “The Dinner Party.” Also included are aluminum-mounted photos of Chicago’s early performances, where she used her pyrotechnical skills to feminize outdoor landscapes with pastel-colored smoke or to enact rituals in tribute to women. Among Chicago’s lesser known but equally significant works is an early 1970s series entitled “Evening Fans” in which she spray-painted geometric grids in her characteristic colors, resulting in effervescent expressions of shifting color and light.