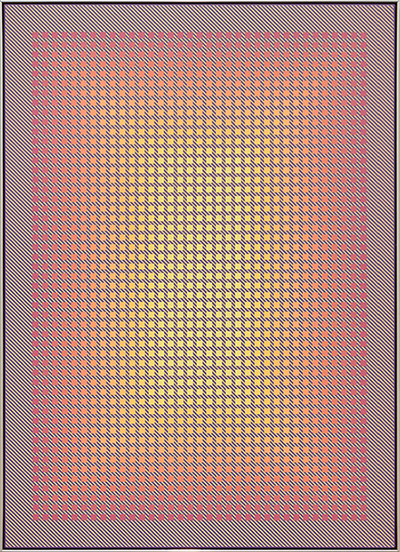 Julian Stanczak (1928-2017) is often regarded to as a pioneer of Op Art (he was included in the 1965 groundbreaking Op Art exhibition “The Responsive Eye” at the Museum of Modern Art), but he preferred the term “visual energy” to “optical” when describing the perceptual effects of his paintings. As a student at Yale University, Stanczak studied with Josef Albers, who introduced him to the concept of “optical mixing,” which is what happens when contrasting colors interact to produce after-images in new colors. Stanczak responded to this information by developing a personal system for painting elaborate layers of linear grids with contrasting color modules to create luminous compositions that, ultimately, are about light.

The current exhibition of fifteen paintings from the 1980s posits an accomplished and mature artist who had truly mastered his craft. With stunning consistency, each painting’s even and precise surface literally shines with a simulated luster that resembles metal or satin. Combined with this, amorphous bursts of light, which Stanczak would compare to primordial forces of nature, activate each work either by emanating from within or by dashing across the surface as you walk by.

While Albers’ aesthetic was a cool, theoretical approach Stanczak’s is more humanistic and soulful. In “College Green” and “Soft Beat,” where an underlying structure of concentric rectangles recalls the older artist’s signature “Homage to the Square” series, the geometric schematic seems to melt before our eyes as boundaries between differing colors optically merge and swirl, imbuing the imagery with a feeling of organic life. In “Upraise” vertical lines intersect with diagonal ones, and a light-to-dark (or dark-to-light) color progression produces the effect of light moving back and forth laterally. In the supercharged “Diagonal Dependence,” there is a constant interplay between the brilliant glow of interior rectangles and a ripple effect of diagonal bands, the effect spread across three individual canvases.

Two paintings that are less characteristic colorwise stand out for setting emotional or psychological moods. In the diptych “Opposing Pair I and II,” the overall palette is dark maroon, which feels lush and regal. Spatially, each of the two panels looks architectural, and there is a yin-yang relationship between the two. In the left section, the background space behind a central vertical bar feels dark and mysterious. In the companion panel, the relationship is inverted, with the recessed area filled with radiant light. A quieter tone is present in the predominantly monochromatic “Offering White,” where a soft milky haze feels melancholic as it seems to hover over the surface.

As a youth, Stanczak, a native of Poland, was held in a Siberian concentration camp, where he was beaten to the point that he lost the use of his right arm. After learning to paint with his left hand, he went on to have a remarkable career. His legacy is more than the paintings themselves, which must also be appreciated as products of perseverance and resilience.